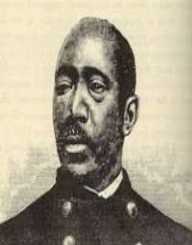 Martin Robinson Delany was an abolitionist, soldier and a physician during a difficult time in the African American lives. He was born on 6th may 1812 as a freeman due to his mothers’ free status in Charles Town Virginia. He lived to fight the concept of slavery with every chance he could find. Delany was a physician and became the first amongst the Africans that got admission to Harvard University. Delany worked to educate other Africans on why slavery was a bad thing and also wrote through abolitionist publications.

He managed to add another feather to his hat by abandoning his lifelong dream of reallocating blacks back in Africa and joined the Civil war as a unionist. Delany, besides, convinced other Africans to enter the war. He died on 24th of January 1885 in Wilberforce, Ohio.

The birth of Martin Robinson Delany came on the 6th of May 1812 in Charles Town Virginia to Samuel and Pati. He was the youngest of the five children. Delany was the grandson of a prince according to his family tree. His grandfather was enslaved and died in Canada trying to fight his slavers.

Due to her heritage as the child of an African prince, Pati may have won her freedom. Delany’s father, however, did not attain freedom till much later and continued to slave as a carpenter. Pati was a relentless woman, and there was a time that she had to fight for her children's freedom in court.

She told the court that she was a born free woman. This by default meant her children were also not slaves according to the laws of Virginia at that time. Delany’s mother educated them using a book The New York Primer for Spelling and Reading she had acquired from a trader. This did not last as Virginia was a slave town and other slavers did not take it kindly to black men reading and writing.

She then moved her family to Chambersburg, Pennsylvania. Delany’s father, however, could not leave at the time. He stayed with his master where he worked so hard to buy his freedom one year later.

In Pennsylvania Martin Robinson Delany continued to study under the caring watch of his mother till he was 19 years old. He would sometimes stop and help the family raise money for his education and continue when he could. Due to his quest for knowledge, he managed to walk up to 160 miles to get to Pittsburgh.

The year 1931 saw him leave home and go to Pittsburgh to join the Bethel Church School for Blacks and Jefferson College. At Pittsburgh, Delany managed to intern under many doctors who were abolitionists. He even managed to learn Greek, classics, and Latin.

The life of abolitionists soon drew him in, and Martin Robinson Delany became a very active member. Here he got to lead a committee called the Vigilance Committee that helped find slaves new homes. The formation of the committee saw the boosting up of the morals of the blacks and help defend against white mob attacks.

He then started, The Mystery. This was an African-American paper. Delany wrote and aired his view about slavery in the paper. He developed articles about anti-slavery movements that were adopted by other newspapers. Delany quickly got famous. This led to defamatory charges being brought against him by another black man he had accused of being a slave catcher.

He was convicted of the same and fined hugely. He could not pay; so his friends and allies at the press bailed him out. After the article and his arrest, Delany got a job offer from Fredrick Douglas in 1845. Their partnership did not last. Five years of a lot of friction on which way to take the abolitionist movement saw his exit.

Martin Robinson Delany got a recommendation to Harvard Medical College after working as an intern with the abolitionist doctors to treat the cholera-sick patients. He was amongst the few other black men recommended at the time. The other white students successfully petitioned the school to kick the black men out.

After this rejection, he settled back down to writing. He then decided to visit Canada and West Africa to negotiate for land that would be used to settle Africans slaves. Around the same time, the Emancipation Proclamation came into play, giving him an entirely new idea on settling of Africans.

Martin Robinson Delany believed in the words of General Washington calling the Africans to fight off the British and even recruited himself. He also helped to convince other slaves to pick up guns and fight. One of his sons saw his point and joined the war. At the end of the war, Delany went back to champion for the release of all the slaves. Later in the year 1880, he went back to his wife in Ohio and started practicing medicine again.

During his travels in the Midwest, Martin Robinson Delany met and fell in love with the daughter of a prosperous merchant. Delany married Catherine Richard and settled down in 1843. Their marriage was blessed with 11 children of those that survived to adulthood. Delany was strict with the idea of school, and some of the children even attended university.

During this time, he decided to settle back at home and support his children's education. Some of them were in colleges and the university. This made him open up his physician shop, and he started helping his wife.

The somber news of Martin Robinson Delany’s death came on January 24th, 1885 after 73 years of life. Delany provided a considerable blow to slavery during his time as an abolitionist.