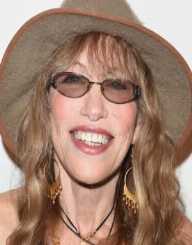 As a youth, Carly Simon attended the Riverdale Country School.

As a young adult, Carly Simon attended Sarah Lawrence College. However, she dropped out of this school to pursue music full time before she could earn a degree.

Carly Simon’s music career began not as the solo career she is best known for, but in a duo group with her sister, Lucy Simon, called The Simon Sisters. This was a folk band which formed in 1964. Throughout the mid to late-1960’s, the sisters produced three albums together: Meet the Simon Sisters, Cuddlebug, and The Simon Sisters Sing the Lobster Quadrille and Other Songs for Children. This duo broke up when Lucy Simon left to get married, to start her own solo career, and take on other entertainment pursuits.

Simon’s professional solo music career began in 1971 when she released her first album, Carly Simon. Later on, in the same year, Carly Simon also released her second album, Anticipation. However, these albums did not gain her much attention. It wasn’t until her third album, No Secrets, which was released in 1972 that she really gained popularity. This was in part because of her most famous song to date, “You’re So Vain,” was was on this album. This was her first album to go platinum.

In the 1970’s, Carly Simon continued to release albums with high ratings from fans. Her fourth album, Hotcakes, has a gold record and her 1978 album, Boys in the Trees, holds a Platinum standing. Her other albums from the 1970’s include Playing Possum, Another Passenger, and Spy.

Simon’s fame began to waver in the 1990’s, as none of her albums have any RIAA standings yet. However, her loss in popularity didn’t discourage her from producing multiple albums. Some of her albums from this decade include My Romance, Have You Seen Me Lately, Romulus Hunt: A Family Opera, Letters Never Sent, and Film Noir.

The 2000’s were Simon’s most recent active years in the record producing industry, with her most recent album coming out in 2009 (Never Been Gone). Her other albums from this decade include The Bedroom Tapes, Moonlight Serenade, The Kind of Love, and Into White. She also sang on two Christmas albums during this decade: Christmas is Almost Here, and Christmas Is Almost Here Again.

One lesser known talent Carly Simon is known for is for her writing. She has published both memoirs and children’s books. Some of her most popular fiction and nonfiction books are listed below.

Boys in the Trees: A Memoir
Reflections - Carly Simon’s Greatest Hits
Amy the Dancing Bear
The Boy of the Bells
The Nighttime Chauffeur
The Fisherman’s Songs
Midnight Farm (co-authored with David Delamare)

Over the course of her long career, Carly Simon has won almost a dozen awards and has been nominated for over a dozen others. Some of her most impressive awards are listed below.

Grammy for Best New Artist of the Year (1971)
Grammy for Best Album Package (Boys in the Trees)
Academy Award for Best Original Song (Let The River Run)
Boston Music Award Award Lifetime Achievement Award (1998)
Cable Ace Awards for Best Song (Touched By The Sun)
Boston Music Awards Female Vocalist of the Year (2002)
Carly Simon has also been inducted into the Grammy Hall of Fame.
Carly Simon has an honorary doctorate of music degree from the Berklee College of Music.