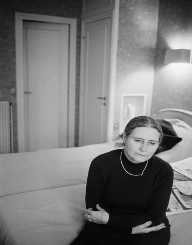 Doris Lessing was born on October 22, 1919, in Kermanshah, Iran. Her father was Captain Alfred Tayler, and her mother- Emily Claude. His parents met at the Royal Free Hospital in London, where her mother was a nurse, but her father was recovering from the loss of his leg during the World War I. Captain Tayler took a job as a clerk for the Imperial Bank of Persia, moving the family there. In 1925, they moved to the British Colony Southern Rhodesia to a 1,000-acre farm. They were farming maize and other crops, but the farm failed to bring income.

Doris was educated at the Dominican Convent High School in Southern Rhodesian capital Salisbury (now Harare). However, she left school when she was 13 and self-educated from then on. At the young age of 15, Doris left home to work as a nursemaid. She began reading a lot on politics and sociology and began writing. In 1937 she moved to Salisbury and began working as a telephone operator. She soon married Frank Wisdom and had two children with him. The marriage ended in 1943.

After divorcing from her first husband, Doris Lessing became increasingly interested in the Left Book Club community, an organization she joined a year earlier. There she met her future second husband, Gottfried Lessing. They married shortly after but divorced in 1949. Doris and Gottfried had a son together. Although she did not marry again, Lessing had a affair with the RAF serviceman John Whitehorn from 1943 and 1949. In 1949, Lessing moved to London together with her son Peter and wanted to pursue her writing career. She left her two older children in South Africa.

In London, Lessing was campaigning against nuclear arms and was an opponent of apartheid, which led her to be banned from South Africa and Rhodesia for many years. In 1956, when the Soviet’s invaded Hungary, Lessing left the British Communist Party.

Lessing published her first novel The Grass Is Singing in 1950. Before that, she was publishing her stories in South African magazines, since she was 15 years old. In 1962, she published The Golden Notebook, which earned her world recognition. In 1982, she published two novels under her pseudonym, Jane Somers. This was an attempt to show how hard it is for new authors to get their work printed. Jane Somers’ work was rejected by her UK publisher but was accepted by Michael Joseph in UK and Alfred A. Knopf in the U.S.

In 1977, Lessing declined the honor of Order of the British Empire, but in 1992, she declined damehood as these honors being linked to a non-existent Empire. In 1999, she accepted the Companion of Honor for Conspicuous national service and was made a Companion of Literature by the Royal Society of Literature.

In 2007, Lessing was awarded the Nobel Prize in Literature at the age of 88, making her the oldest receiver of the prize at the time. She titled her Nobel Lecture “On Not Winning the Nobel Prize,” which drew attention to global inequality of opportunity. The lecture was later published to raise money for children made vulnerable by HIV/AIDS. Her final book Alfred and Emily was published in 2008.

During her life, Doris Lessing published more than 50 novels, some of which under a pseudonym. In the late 1990s, Lessing suffered from a stroke, which made her stop traveling. She continued to attend opera and theatre. After the stroke, Lessing was focused on her death. She died in 2013, at her home in London, when she was 94 years old. Her two sons predeceased Lessing, but her daughter Jean still lives in South Africa.

In 1977, The Doris Lessing Society was structured, to support the scholarly study of Lessing’s work. The first issue of the Doris Lessing Newsletter was released in the same year. In 2002, it became an academic journal titled Doris Lessing Studies. Her literary achieve is held by the Harry Ransom Humanities Research Center at the University of Texas, Austin. There are a total of 45 boxes of her manuscripts and typescripts up to 1999.