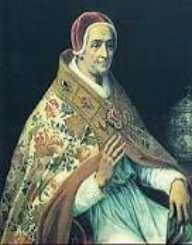 Born Robert of Geneva in Chateau d’Annecy in 1342, Clement VII was the son of Count Amadeus III and Marie de Boulogne. He is the first Antipope of the Western Schism.

He studied at the College of Sorbonne, a theological college under the University of Paris. By his mother’s lineage, he was a cousin of the King of France. He served as the Bishop of Thérouanne from 1361 to 1368. In 1368, he became the Archbishop of Cambrai.

On May 30, 1371, Clement VII was elevated to the post of Cardinal. Pope Gregory XI, the last Pope of the Avignon papacy, was the main force behind the elevation of Clement VII to the cardinalate. Clement VII is infamous for his brutal act of ordering the massacre of 4000 anti-papal rebels as in charge of keeping peace in the Papal States of Italy. The killings took place at the small city of Cesena during the War of the Eight Saints in February 1377.

ELECTION OF POPE AND THE SURROUNDING CONTROVERSY

Pope Gregory XI passed away on March 27, 1378. The Cardinals elected Italian Bartolomeo Prignano as the next Pope. The choice initially was almost unanimous. Though there was intense pressure from the Roman people to choose an Italian for the coveted post, the choice of Bartolomeo Urban VI as the successor of Gregory XI could not have been more consensual.

Upon his coronation as the new Pope, he took the name of Clement VII and began consolidating his position securing allies against Urban VI. Though due to his French nationality, most of the Cardinals and Queen Joanna of Naples stoutly backed and favoured him as the new Pope, Clement VII was unable to acquire the sole control of the papacy.

STALEMATE OVER THE POSSESSION OF THE PAPACY

The European countries were divided in their support over the issue of papal claimants. France always favoured Clement. The Eastern Church also had the same view. However, England was a staunch supporter of Urban VI. Clement took the help of French mercenaries to evict Urban VI from the Vatican forcibly. All his hopes of forcibly dislodging Urban VI vanished into thin air when the French troops loyal to him encountered a crushing defeat at Marino in April 1379. Clement had to retreat to Naples where Queen Joan I acknowledged his claim as the legitimate Pope.

However, the people of Naples did not support his candidature and favoured Urban VI. With no hope of a convincing majority in his papal claim, he along with the 500 Cardinals supporting him moved back to Avignon in Southern France.

After having settled in Avignon, Clement VII tried hard to secure legitimacy as Pope by continuous negotiation with all the stakeholders. Over time, Clement was able to garner some strong support including that of Charles V of France. In spite of the strong support for Clement, Europe remained divided between two almost equal allegiances. Both Clement and Urban had their support base spread all over Europe. To maintain the vast support base, Clement had to cough off large sums of money.

The exercise included numerous diplomatic missions, sponsorship, and hectic military parleys. It resulted in draining of the treasury. Clement tried to mitigate the shortage by massive borrowing and levying higher taxes on the clergy. However, in spite of all these efforts, the dispute could not be sorted out during his lifetime. He died of apoplexy on the morning of September 16, 1394.

The dual papacy controversy caused great confusion among the citizens of Europe. Both France and England were at loggerheads on this issue, and it prolonged the 100 Years War between the two neighbouring countries.

As the uncertainty over the issue of the legitimacy of the papal claim could not be resolved before Clement’s death, his tenure as Pope was recorded as Antipope. King Charles V of France declared him as the ‘true shepherd of the church’ giving him the due recognition hours before his death.