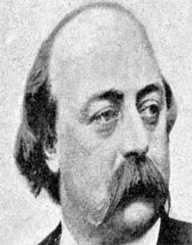 Gustave Flaubert was an influential French novelist considered as the leading proponent of literary realism in France. Born on December 12, 1821, he is known for the novel Madame Bovary in 1857, his literary style, and appreciation of nature in his works.

He avoided assonances, clichés, and abstract expression and pursued a principle of always using the right word as needed. His novella Hérodias was adapted into an opera of the same name by Jules Massenet, and Emmanuel Bondeville also adopted Madame Bovary into opera.

Gustave Flaubert was born on December 12, 1821, in Rouen in the Upper Normandy of northern France as the second son of Anne Justine Caroline and Achille-Cléophas Flaubert.

His father was a director and senior surgeon in a hospital in Rouen. According to sources, Gustave Flaubert started writing at an early age of eight. He received education at the Lycée Pierre Corneille in Rouen. He later moved to Paris, where he studied law. He then abandoned his law studies and left Paris after an epilepsy attack.

Gustave Flaubert made a professional writing debut with the novella, November in 1842. He completed the first version of the novel, The Temptation of Saint Anthony in 1949. After completion, he read it aloud to his friends Maxime Du Camp and Louis Bouihetin four days. He neither allowed them to interrupt nor make any suggestion during the reading.

After completing, they asked him to burn the entire manuscript. They suggested that he shun fantastic subjects and focus on daily life happenings He started working on the novel, Madame Bovary in 1850, which he took five years to complete.

After completion, it was serialized in the Revue de Paris in 1856. Flaubert and the publisher of the novel were charged for immorality by the government for the work. They were acquitted after the hearing in 1857. Madame Bovary was later printed in book form and received a warm reception.

His next work was the novel Salammbo, for which he traveled to Carthage to gather materials in 1958. It was completed after four years in 1862. Flaubert also took seven years to complete the novel L'Éducation sentimentale (Sentimental Education) published in 1869. He wrote the drama, Le Candidate, but was unsuccessful.

Gustave Flaubert came out with Three Tales in 1877, comprising three stories, Hérodias (Herodias), La Légende de Saint-Julien l'Hospitalier (The Legend of St. Julian the Hospitaller), and Un Cœur simple (A Simple Heart). He then worked on the Bouvard et Pécuchet, which he had started some years back. It was published posthumously in 1881.

His other works include  Rêve d'enfer (1837), Memoirs of a Madman (1838)and Le Château des cœurs (1880). Flaubert was also an astute letter writer, with his letters been collected in numerous publications. Some of his works have been adapted into films and operas including Hérodias and Madame Bovary.

Gustave Flaubert dated poet Louise Colet from 1846 to 1854. He did not marry and had no children. After abandoning his law studies and leaving Paris, he moved to Croisset, where he spent the rest of his life. Flaubert traveled visiting countries including Egypt, Greece, Turkey, Beirut and other parts of the Middle East widely.

Gustave Flaubert had several sexual encounters with both male and female prostitutes during his travels. He described himself politically as a "romantic and liberal old dunce," an "enraged liberal" and a hater of all autocracy.

Gustave Flaubert battled with several sexually transmitted diseases most of his life. Gustave Flaubert died on May 8, 1880, at age 58 from a cerebral hemorrhage. He was interred in a family vault in the cemetery of Rouen.