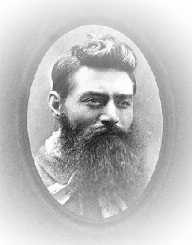 Ned Kelly was born as Edward Kelly in June 1855 in Victoria, Australia. Some sources put his year of birth as 1854. He was the third born child of John and Ellen Quinn. John was an Irishman who after being found guilty of stealing two pigs was sent to Australia. In the 1800s, Britain sent most of its convicts to Australia as a form of exile punishment. On reaching Australia, he got employed at James Quinn’s farm. He later married his daughter Ellen.

John settled in Victoria and began a family with his wife. In 1864, Ned, who was ten years, moved with his parents to Avenel. He joined formal schooling in the locality. Due to his father’s criminal history, Ned and his siblings were constantly under police and community surveillance.

They sometimes fell victim of unfair accusations from their neighbors. In December 1866, Ned lost his father. At the age of 12, he became the breadwinner for his family consisting of his mother and other seven children.

Ned Kelly moved again with his family to Eleven Mile Creek. Ned discontinued his education to work and support his mother in the family. His family was targeted again in Eleven Mile Creek with allegations of theft.

The accusations continued for a better part of his early stay at their new home. The police arrested him at the age of 14 for allegedly assaulting a person. The court dismissed the criminal charges against him for lack of sufficient evidence. Despite the freedom, Ned had suffered ten days in custody.

In the late months of 1869, Ned Kelly became friends with Harry Power. Power was a bushranger. A bushranger was an escaped convict who roamed the bushes of Australia to avoid capture by the police. Ned perfected being a bushranger under the training of Power.

Ned was arrested the following year in 1870 for being an associate of Power. The police failed to prove the criminal intent in the association. Ned was released from police custody.

In October 1870, Ned Kelly got his first criminal conviction in a court of law. He entered into an argument with Jeremiah McCormack. In the heat of the debate, Ned attacked and injured the hawker, McCormack. He was arrested and jailed for six months. In March 1871, he was released from jail after the end of his term. In April 1870, he was found in possession of a stolen horse.

Ned’s brother in law Alex Gunn found a horse and gave it to Ned. Ned, in his naivety, took the horse without knowing its missing report. In their mitigation, they pleaded leniency from the court. They were sentenced with a lesser charge from the first robbery with violence. Ned and Gunn received three years in prison.

In 1876, Ned Kelly started a horse heft racket with his father in law. He gradually initiated his brothers into criminal activities. On April 15, 1878, police officer constable Alexander Fitzpatrick appeared at the Kelly home to arrest Ned’s younger brother Dan. He was accused of stealing a horse in his possession. In the scuffle to shield his brother from being arrested, Ned shot and severely injured the officer.

The two brothers fled into the bush. Their mother was convicted for being an accomplice in the attempted murder of a police officer. She was jailed for three years.

In the bush, Ned Kelly reinforced his team to four. They became the Ned gang. Ned and his band of bushrangers operated on the border of Victoria and New South Wales. The police offered a bounty of GBP 100 for information leading to the capture of Ned and his gang.

On the other hand, Ned became increasingly bitter at the allegations and conviction of his mother. He always claimed his mother was innocent of the accusations.

On October 25, 1878, the police set an ambush after getting a tip-off of the whereabouts of the gang’s hideout. Three policemen raided the sanctuary in the Wombat Ranges, with orders to kill the brothers on sight. Ned got the better of the policemen. He ambushed the camping site where the policemen were based. In the ensuing shootout, Ned and his gang killed all the three officers. The authorities raised the bounty to GBP 500.

Ned Kelly widened criminal activities to include raiding of banks. They broke into two banks and looted an unspecified amount of cash in 1879. They continued with their raids on financial institutions and goods stores.

On one occasion, Ned and the gang held hostage people at the Glenrowan railway station and the adjacent hotel. They planned to derail two trains bringing in police reinforcement to the area. Ned used the hostage crisis to hasten the trains in coming to Glenrowan.

On June 28, 1880, a released hostage informed the police of the plot to derail the trains. The two passengers were halted before their destination. In the gunfire battle between the gang and the police, Ned Kelly was injured and captured. His band was killed.

He was tried on October 28, 1880, and convicted to hang. Ned was hanged on November 11, 1880, in Melbourne. His armored military outfits with his rifle which he was captured with were taken to the State Library of Victoria.