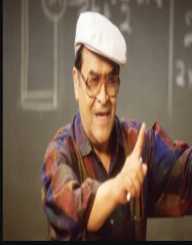 Jaime Escalante was born in 1930 as Jaime Alfonso Escalate Gutierrez in La Paz, in Bolivia. He was born into a family of teachers, who were ancestors of Aymara. Jaime Escalante was extremely proud of his heritage and believed that the Aymara people were more evolved and intelligent as people in ancient Egypt and Greece.

Escalante has studied in several universities and colleges in his life. He attended Escuela Normal Simon Bolivar and graduated with a teaching degree. In 1955 he graduated from University Mayor de San Andres and received a degree in Mathematics there. In 1969 Jaime Escalante earned a degree in Arts in Pasadena City College.

Jaime Escalante started working in Bolivia as a teacher of mathematics and physics. He was teaching those subjects for 12 years. After this experience, he decided to move to the United States. Initially, in the United States, he did not work as a teacher, but did several other low-level jobs, while studying the English language and attending another University. After graduating, in 1974 Jaime Escalante started working as a teacher at Garfield High School.

Precisely at the same time, the accreditation of the school was questioned, but Jame Escalante did not agree to lower the standards for his students to save the school. He did precisely the opposite – he raised the rules, which forced students to study more and with a higher sense of responsibility.

He offered his students a perspective of good jobs and careers if they paid enough attention to his subject – maths. The perspective fields he provided were electronics, computers, engineering and some others.

Jaime Escalante's initiative in the school was not welcomed too openly, until the change of the principal in the school. As soon as Henry Gradillas started working as the principal, he motivated Escalante to continue what he had already begun. Henry Gradillas reduced the number of primary math classes and increased the number of algebra classes, and enforced some other ideas of Escalante to achieve better results.

In 1978 Jaime Escalante first started teaching Calculus. Initially, only five students attended it, and only two passed, but the following years the ratio increased exponentially. In 1979 nine students took the class, and seven passed the test, and the interest in Escalante’s calculus class kept growing from year to year.

Just a couple of year later in 1982 eighteen of Escalante’s students passed the Advanced Placement Calculus exam. The results seemed faked, and therefore several students had to re-do the review, and twelve of the students who agreed to do the exam again, passed it.

The number of students successfully passing the exam kept doubling from year to year, and Escalante got nationwide attention.

In 1983 Jaime Escalante was invited to teach a Calculus class at East Los Angeles College.

The success of Jaime Escalante was recognized and was real. His methods worked, and the number of students passing the exam was increasing which inspired a book and a movie to be produced. The book written by Jay Mathews was released in 1988 and was called “Escalante: The Best Teacher in America,” and a movie “Stand and Deliver” followed shortly.

After Escalante’s work became publicly known, he continued working and preparing students for the calculus exam. Some people disliked his popularity, and Jaime Escalante began receiving threat mail. The conflicts in Garfield high school escalated, and in 1900 Escalante lost his position in the maths department.

His classes were overcrowded, sometimes more than 50 students attended them instead of the allowed 35, and this also raised some debate about Escalante’s work. As his class reached top interest in 1991, he was forced to leave Garfield because of the scandals and political situation inside the school.

Jaime Escalante started working in Sacramento in California, which attracted vast numbers of his previous students from Garfield. To honor his accomplishments, in 1993 an asteroid was named after Escalante – “5095 Escalante”.

In Garfield another teacher, Angelo Villavicencio took over Escalante’s work but was also forced to leave Garfield, as his demands to create another class for the program were denied. After Escalante and Villavicencio left Garfield, the level and quality of the maths program declined. The number of students who successfully passed the calculus exam decreased more than by 80%.

Jaime Escalante returned to his home in Bolivia in 2001. There he lived together with his wife and continued teaching at a university there. Their children stayed in the United States. Therefore Escalante traveled there regularly.
for a couple of years

Jaime Escalante developed bladder cancer, and could not afford the treatment, thus moved to his son to California. There he lost the battle to cancer in 2010 at the age of 79.

To honor his accomplishments, soon after he passed away, the California State University awarded him with honorary membership.

This award was received by an actress who played a role in the movie “Stand and Deliver” about Jaime Escalante.