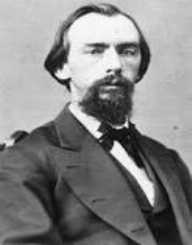 Johann Georg Nicolai was born 26th February 1832, in Essingen, Rhenish Bavaria. In 1838, he migrated to the United States with father. They settled in Cincinnati where Nicolay attended school.

John Nicolay moved to Illinois and became the editor of the Pike County Free Press in Pittsfield. He worked his way into becoming a political influencer in the state. He was appointed an assistant to the Secretary of State in Illinois, and during this period he met Abraham Lincoln, to whom he became devoted.

In 1861, Nicolay became Lincoln’s private secretary. Nicolay held the position until 1865 when Lincoln was assassinated. Just before his death, Lincoln appointed Nicolay to a diplomatic post in France, where he served from 1865 to 1869. Upon his return to the U.S., Nicolay was an editor at the Chicago Republican.

In 1872, John Nicolay was appointed Marshal of the United States Supreme Court, a position he held until 1887. He then worked with John Hay, a colleague during his employment with Lincoln, to write the official biography of Abraham Lincoln, 16th President of the United States. The works were initially published a serial in The Century Magazine from 1886 to 1890 but were then published between 1890 and 1894, as a ten-volume series. There were a further two volumes called the Complete Works of Abraham Lincoln.

His last work, published in 1912, was called, Personal Traits of Abraham Lincoln. In 1874, he helped establish the Literary Society of Washington. Nicolay resigned his position of Marshal of the Supreme Court due to ill-health. He died on 26th September 1901 while living with his daughter.