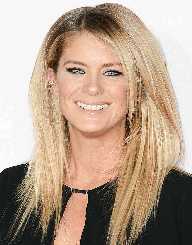 Rachel Hunter is an actress and model who was born in Glenfield, a suburb on the North Shore of Auckland, in New Zealand on 9 September 1969. Her parents were Wayne and Janeen Hunter. Rachel Hunter's parents divorced when she was fifteen. She has a sister Jacqui. Rachel Hunter was a keen ballet dancer as a child, but ill health got in the way of her ambition, and she turned to modeling.

Rachel Hunter started modeling at a young age and did some successful commercials on television. One of those early commercials was for Trumpet ice-cream cones. This advertisement made her a familiar face in her native New Zealand in the mid-1980s. Her big break came when she was chosen to film a commercial with Simon Le Bon of Duran Duran fame when she was sixteen. Le Bon was at the height of his fame at the time.

Shortly afterward the Duran Duran commercial, Rachel Hunter was signed up by the Ford modeling agency in New York, and she subsequently shot to fame as a supermodel. Soon she appeared on the cover of Vogue magazine in North America and Europe, Elle and Cosmopolitan. She also won a contract with Cover Girl cosmetics.

Known to be a calm, collected young woman, Rachel Hunter soon found herself showered with attention, especially after she posed as a Sports Illustrated model. Later, she started taking acting lessons and appeared on television, then moved into feature films and did some music videos. Recent work includes a thirteen episode television show traveling the world looking into the cultural meaning and subjective ideas about beauty.

Rachel Hunter debut film was a romantic comedy Just a Little Harmless Sex (1998). She then starred in A Walk in the Park (1999), Two Shades of Blue (2000), Pendulum (2001) and Redemption of the Ghost (2002).  Other worked included music videos. One as in Fountains of Wayne’s Stacy’s Mom music video. Rachel Hunter played the mother. The accepted an offer to appear in Playboy magazine in 2004. Playboy had made her an offer a few years earlier, but she had refused because she felt too young. The 2004 Playboy fee was thought to have been over the US$1.5 million mark. In 2005, she was seen on the US reality show Dancing With the Stars and the British version Strictly Come Dancing. The also hosted the reality show Make Me A Supermodel. Then in 2006, she did Style Me With Rachel Hunter.

.Apart from acting and modeling, Rachel Hunter worked in the fashion industry. Firstly she got involved with a swimsuit range, Lola. Then in 2008, she worked with a large clothing chain in New Zealand. The idea was to provide a range of reasonably priced; but beautiful garments for women.

In 1990, she met rock star Rod Stewart (46) who proposed to the twenty-one-year-old New Zealand beauty after knowing her for less than a month. They married in a lavish wedding in Beverly Hills in December 1990 and divorced in 1999. The couple had two children together. Today Renee Hunter, their daughter, is a successful model and dancer.

Rod Stewart is on record as saying that he was dismayed when Hunter approached him for a divorce in 1999 and that it left him shattered and heartbroken. Rachel Hunter felt she had married too young and had being absorbed into his rock star lifestyle before discovering who she really was.

A blood disorder prevented Rachel Hunter from pursuing her dream of a career as a ballet dancer.

Rachel Hunter has been a supporter of the Born Free Foundation for some time. The association focuses on the protection of threatened species, protecting wildlife and preventing animal suffering.