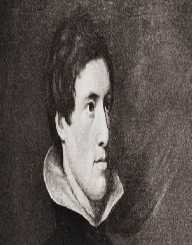 Charles Lamb was born on February 10, 1775, in England. His parents were Elizabeth Field and  John Lamb. He had an older sister, Mary, who he worked with. He also had an older brother, John Lamb. Horrifically, when Charles was about twenty, his sister murdered his mother. However, she was not imprisoned for his.

As a young child, Charles Lamb was mostly taught from home by his sister and parents. He was also taught by a woman named Mrs. Reynolds. However, when he was only seven years old, he began to attend the Christ’s Hospital, which was a type of tuition-free boarding school. He studied here until 1789 when he was about fourteen years old.

In his late teenage years, Charles Lamb started to work for the Examiner’s Office. He had originally wanted to become a clerk, but his speech impediment (a stutter which he suffered from his entire life) made it so he could not do the job. He worked at the office until 1792. In that same year, he started to work for the East India House, which was a part of the famous East India Company. He worked here for most of his life (while pursuing other unrelated career goals) until he retired in 1825.

Charles Lamb published his first sonnets, which are a type of stylized poem, in 1796, when he was just over twenty years old. These poems would be one of the first of many literary works in which Charles Lamb would produce in his lifetime. He was in part influenced by many authors of the time, as he was friends with several of them, including William Wordsworth and Samuel Coleridge.

Throughout the 1790’s, Charles Lamb published mostly poems. It wasn’t until 1801 that he started to work in various newspapers around London. He simply did this to earn more money, not for fame. Even though he was working in non-fiction with the newspaper, he continued to write fiction and poetry in his spare time. In 1802, he published John Woodvil, which would later go on to become one of his most famous works.

Lamb’s possibly most famous work was not released in 1807. This work was called Tales from Shakespeare. The book was a series of short stories based on Shakespeare plays. These stories were made for children and where more or less Shakespeare plays written in prose instead of as an actual play. He wrote these stories with his sister, Mary, who he was also taking care of by this point, as she suffered from mental illness. He would later go on to write more stories with his sister.

After Tales of Shakespeare proved to be a hit sensation, Charles Lamb took to adapting other famous works into children tales. Some of the other stories he rewrote were The Odyssey and The Adventures of Ulysses. These were both printed in the late 1800’s.

In the 1820’s, Charles Lamb focused less on children’s tales and more on essays. He wrote several essays throughout his decade. Many of the essays he wrote were featured in the London Magazine. He also returned to writing poetry around this time.

Charles Lamb is also famous for writing the works in the list below.

Charles Lamb had many loves in his life, but he was never married. He spent most of his life taking care of his older sister, Mary. In the 1820’s, he and his sister adopted a child together, Emma Isola. Even though the siblings were close, it is not likely that they were incestuous.

Throughout his lifetime, it was well known that Charles Lamb was an alcoholic. His tendency to drink much more than he should have no doubt impacted his health negatively. He also stayed in an asylum during parts of his life because of his intense drinking problem. He also suffered from depression, but that was less likely to have been known when he was alive.

Charles Lamb died on December 27, 1834, in London, England. The cause of his death was erysipelas, a type of bacterial infection.  He was only 59 years old when he passed away.