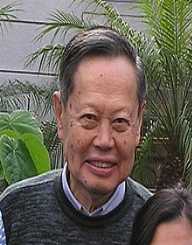 Samuel Chao Chung Ting is a physicist who won the 1976 Nobel Prize in Physics, sharing with Burton Richter for the discovery of the J/ψ meson nuclear particle.

Samuel Chao was a premature baby born to parents, Kuan-hai Ting and Tsun-Ying Jeanne Wang. His parents were from Shandong province in China but were visiting America when he was born.

Kuan- Hai-Ting was an engineering professor, and Jeanne Wang was a psychology professor; they were both graduate students at the University of Michigan. Samuel was the first of three children.

His parents homeschooled Samuel Chao during the Japanese invasion of China during World War II.

During his teens, the Chinese Civil War forced his family to escape to Taiwan. Samuel Chao Chung Ting went to high school in Taiwan in 1948, and then briefly attended Taiwan Provincial Engineering College but dropped out soon.

Armed with only USD 100,  twenty- year- old Samuel Chao arrived in the United States on 6 September 1956.

Samuel Chao lived with George Granger Brown, who was the Dean of School of Engineering for the University of Michigan.

Samuel Chao studied hard to earn scholarships to finish his Bachelor of Science in Engineering, for both Mathematics and Physics in 1959 and obtained his masters in the following year. Samuel Chao received his doctoral degree in 1962.

In 1963, Samuel Chao moved his family to Geneva, Switzerland to work at European Organization for Nuclear Research (CERN) as a Ford Foundation postdoctoral scholar.

Samuel Chao collaborated with Giuseppe Cocconi on the Proton Synchrotron, where he learned more about protons of heavy ions. The family returned to America in 1965, as Samuel was recruited as a lecturer in Physics for Columbia University.

He was invited to Hamburg in1966 to experiment the  Deutsches Elektronen Synchrotron (DESY). With a team of his choosing, Samuel Chao constructed a double- arm spectrometer to study electron pairs.

Samuel Chao joined Massachusetts Institute of Technology (MIT) as Assistant Professor of Physics in 1967, and two years later he was awarded full professorship. His team was still in Hamburg until 1971, moving to Brookhaven National Laboratory in New York.

Samuel Chao had built a more advanced double-arm spectrometer. The team found the J particle in 1974, at the same time with Burton Richter of the Stanford Linear Accelerator Center, where the same particle was named ψ meson nuclear particle.

Samuel Chao became the first Thomas Dudley Cabot Institute Professor of Physics at MIT in 1977. His experiments for new particles continued, as well as building better equipment for the projects.

Samuel Chao became the principal investigator for the cosmic-ray detector in space during 1995; the first Alpha Magnetic Spectrometer was mounted on the International Space Station.

Samuel Chao then successfully lobbied for the second spectrometer to be funded and mounted in 2011, he continues to be the director of the Alpha Magnetic Spectrometer.

Samuel Chao met architect Kay Louise Kuhne, and they tied the knot in 1960. The pair had two daughters: Jeanne and Amy before divorcing later. He then married  Dr. Susan Carol Marks in 1985, and a son Christopher was born a year later.

Samuel Chao shared the 1976 Nobel Prize for Physics with Burton Richter, as they both discovered the same particle.

Samuel Chao has Doctoris Honoris Causa by the University of Michigan in 1978, as well as Chinese University in Hong Kong in 1987 and many more.