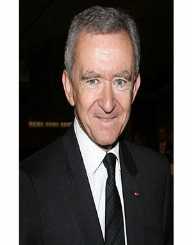 Bernard Arnault is an entrepreneur and CEO of the world's largest luxury-products company.  At one point, he was the richest man in Europe.

Bernard Arnault was born on March 5, 1949, in Roubaix, France. His father owned a civil engineering company called Ferret-Savinel. With business already in his background, he showed cleverness and smartness when it came to business and decision-making.

Bernard Arnault attended high school at Maxence Van Der Meersch in Roubaix. He is a graduate of École Polytechnique. He earned his engineering degree in 1971.

Bernard Arnault joined his father in the family business after graduation. It took some convincing, but he was able to expand growth and make the company more profitable. One way that he did that was by liquidating the construction division of the company and focus on real estate.

The company was renamed Ferinel, and the funds from the liquidation were immediately invested in the real estate business. Their specialty was in holiday accommodation.

Bernard Arnault was moving up in the business world. He was promoted to Director of Company Development in 1974, then CEO in 1977. By 1979, he took his father's place as president of the family company.

When François Mitterrand was elected as French president and the French Socialists came into power, Bernard Arnault and his family moved to the United States. There he was able to create a branch of his family's property business.

Bernard Arnault developed condominiums in Palm Beach, Florida and continued growing his fortune. He returned to France in 1983 when the economic atmosphere improved.

The next business venture that Arnault followed was in the textile industry. He along with Antoine Bernheim worked on purchasing Boussac Saint-Frères when it filed for bankruptcy. He sold off most of the company's assets with the exception of the Christian Dior couture house and Le Bon Marché department store.

By 1985, Bernard Arnault was the CEO of Dior and made $400 million in the sale. In 1987, he was working on the acquisition of Moët Hennessy Louis Vuitton SE (LVMH). By 1989, he had 43.5% of the shares and 35% of the voting rights. He was elected the chairman of the executive management board.

Just like he did with his father's company, Bernard Arnault worked on the expansion and growth of LVMH. This included a changeup at the executive level to bring in new talent and ideas. Today the European luxury goods conglomerate has five business groups: Perfumes and Cosmetics, Fashion and Leather Goods, Wine and Spirits, Watches and Jewelry, and Selective Retailing. It consists of more than 70 prestigious brands.

Bernard Arnault was a part of the acquisition of companies such as Guerlain, Marc Jacobs, Sephora, and Thomas Pink. Other investments included web companies such as Boo.com and Zebank.  He was also a part of investing in Netflix. In 2008 he bought Princess Yachts and Royal Van Lent shipyard.

Bernard Arnault has married twice. He first married Anne Dewavrin in 1973. They had two children before they separated in 1990. He later married pianist, Hélène Mercier. The couple has three children.

Bernard Arnault continues to be on the list of the world's richest men. He was once the richest person in Europe and the fourth richest man in the world.

Bernard Arnault achieved this wealth through the ambition and risk-taking and make his companies grow and succeed. His work has inspired other fashion companies to follow his model.

Through his company, Bernard Arnault has been involved in philanthropic endeavors. Their support helps scientific and medical research as well as humanitarian assistance. Some of the organizations that receive that help includes Save the Children, the Foundation for Hospitals in Paris, and the Princess Grace of Monaco Foundation.

Commander of the French Legion of Honor, 2007

Grand Officer of the French Legion of Honor, 2011

Honorary Knight Commander of the Most Excellent Order of the British Empire, 2012

Bernard Arnault has been known throughout the world for his art collection. Some of the pieces in his collection are by Yves Klein, Andy Warhol, Pablo Picasso, and Henry Moore. Through his efforts, Arnault made LVMH as a major patron of Art in France. For a while, he owned the art auction house of Phillips de Pury & Company from 1999 to 2003.

Chairman of the executive management board, LVMH, 1989