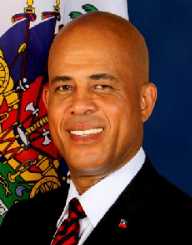 Michel Martelly was born on February 12, 1961. He is a Haitian politician, businessman, and politician. He is presently the President of Haiti. He was a famous musician in Haiti before joining politics. As a musician, he was known by the name ‘Sweet Micky.’

Michel Martelly was born on February 12, 1961, in Port-au-Prince, Haiti. He was born into a middle class family. His father was an executive for the Shell Oil Company. He attended Saint Louis de Gonzague High School. After graduating high school, he joined Haitian Military Academy where he was later expelled.

In 1984, Michel Martelly moved to Miami, Florida where he joined college. He also worked in construction to earn a living. In 1986, after one semester in college, he returned to Haiti for one year. His return to Haiti was when President Jean-Claude Duvalier was in exile. In 1988, he returned to Haiti again where he started playing keyboard in Port-au-Prince. In the same year, he recorded his first single ‘Ooo La La’ which became a hit. In 1991, there was a coup de tat, but he continued playing in Port-au-Prince. From 1988 to 2008, he recorded and released 14 studio albums under the name Sweet Micky.

In 1992, Michel Martelly played at a protest where people were against the arrival of the United Nations representative who was sent to foresee the return to power of Aristide in Haiti. In 1995, after Aristide was reinstated to the Presidency, he appeared as a threat to his rule. Michel ran away for a year where he went on tours abroad during the period. In 2004, there was a coup de tat in Haiti, and Gerard Latortue became Prime Minister. Gerard was a friend of Michel, and so in 2007, Michel Martelly moved back to Haiti from Miami where he was living with his family. In 2010, he ran for the Haitian Presidency, and there was a runoff.

In 2011, Michel Martelly won the Presidency when he defeated his opponent Mirlande Manigat. He was sworn in on May 14, 2011, as the Haitian President. In the same year, he teamed up with President Bill Clinton and other people in business to help in the development of the Haitian economy. In 2012, he was accused of receiving a bribe from a Dominican Republic Construction Company for awarding the company a contract. In 2015, there were protests in Port-au-Prince as to the dissolution of Parliament.

In 2012, Michel Martelly received the Grand Cross with Gold Breast Star of the Dominican Republic’s Order of Merit of Duarte, Sanchez, and Mella.

In 1987, Michel Martelly married Sophia Saint Remy with whom he has four children, Yani, Malaika, Sandro, and Olivier.