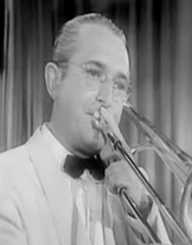 Thomas Francis Dorsey Jr. was born 19th November 1905, to Thomas Sr. and Theresa Dorsey. He was born in Shenandoah, Pennsylvania, in the United States. Dorsey had two brothers and a sister. Dorsey’s father was a bandleader, so it was quite natural that Dorsey would develop an interest in music.

Dorsey’s older brother, Jimmy, also became involved in the music industry. When Dorsey was 15 years of age, Jimmy recommended him as a replacement in the band, The Scranton Sirens. The brothers worked in several bands together, including Rudy Vallee and Vincent Lopez’s bands.

In 1923, Tommy Dorsey and his brother went to Detroit to play in a band, and then in 1925, they went to New York where they played with the California Ramblers. Dorsey then joined the Paul Whiteman band in 1927.

In 1929, Dorsey and his brother had their first hit, called, Coquette. In 1934, they signed a contract with Decca records, and several more hits followed. Glenn Miller, who would later become a legendary bandleader on his own, was part of the Dorsey Brothers Orchestra during 1934 and 1935, and he wrote several songs for them.

In 1935, despite the success the band was having, Dorsey split from his brother to form his band, due to ongoing disputes and disharmony between the pair.

Tommy Dorsey formed his first band with members from another band, and they immediately began to have success. They signed with RCA Victor and had four hits in 1935. Dorsey’s manager then had the band change to pop music and vocals. They got radio airplay in 1936, and 1937 took over Jack Pearl’s radio show.

Dorsey’s band began to get negative feedback that they had moved away from jazz, so in 1939, Dorsey hired Sy Oliver, an arranger with another band, to write for him. In 1940, he then hired a singer, Frank Sinatra. Between 1940 and 1942, Sinatra recorded 80 songs with Dorsey’s band.

Tommy Dorsey had several famous musicians, singers, and arrangers working for him during his successful years in the 1930s and 1940s.

Dorsey loaned Glenn Miller the money to launch his band. In return for his loan, Dorsey expected a percentage of Miller’s earnings, but Miller wouldn’t agree to the terms. Dorsey retaliated by starting up a new band that copied Miller’s style and sound.

In 1940, he established two music publishing companies, Sun and Embassy. He also established a ballroom in competition to the Hollywood Palladium after his relationship with the Palladium went downhill.

At the end of 1946, Tommy Dorsey disbanded his orchestra, but in early 1947 he had a hit with his album, All Time Hits, and he also had a top-ten hit with his single How Are Things in Glocca Morra? By March 1947, he had re-formed his band.

He also reconciled with his brother during this period, and in 1953, after Dorsey’s brother, Jimmy disbanded his orchestra, Dorsey asked him to join his band again as a feature act.

The Dorsey brothers then turned to television, and after appearing on a television variety show, from 1954 to 1956, they had their show, Stage Show. Their show was the first to introduce Elvis Presley before he became as famous as he did.

Dorsey had a staggering 286 Billboard chart hits, including 17 number ones. There were 15 albums released between 1961 and 2004.

Tommy Dorsey has had three songs inducted into the Grammy Hall of Fame:

Tommy Dorsey married Mildred Kraft in 1922. He was just 17 at the time. The couple had two children, a son, and a daughter. They divorced in 1943.

Dorsey’s third marriage was to Jane New, a dancer, in 1948. Dorsey also had a son and a daughter with New.