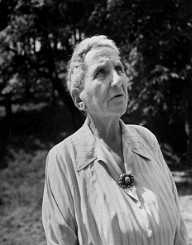 Gertrude Stein was born on February 3, 1874, in Pittsburgh, Pennsylvania, USA. Her parents were Amelia and Daniel Stein. She also had four older siblings. Sadly, her parents died in 1892, leaving her to live with her aunt.

As a young adult, Gertrude Stein attended Radcliffe College, beginning in 1893. While there, she studied writing. It is suspected that while she attended this school, she first experimented with stream-of-consciousness writing (which is when an author writes what they are thinking as they are thinking it, without planning or much editing). This style of writing was fairly new at the time, which helped her stand apart from other students and writers. She later graduated from this school in 1897.

After graduating from Radcliffe College, Gertrude Stein shortly attended the John Hopkins University for medical training. However, she dropped out before long and left the United States to live in Europe. Some suspect that she left this school because she fell in love with Mary Bookstaver, who was already in love with another woman, and who would not be with Stein.

Gertrude Stein settled in Paris in 1903. At this time, she lived with one of her brothers, Leo Stein. The two began collecting art together, and soon after, Gertrude Stein began working on her writing career. She wrote several drafts of books involving her love triangle with Mary and her girlfriend, along with stories about other scandals that went on at her old school.

However, it wasn’t until 1909 that Stein published her first book, called Three Lives. This was a book containing three shorter stories which all shared the same setting.

In 1914, Leo moved out of his shared home with Gertrude. When he left, he took much of the art collection the two shared. Gertrude was left with many Cubist paintings, which inspired her to learn more about the art form. Later in the same year, she published the book Tender Buttons, which was a nonfiction work about various Cubism artworks and literature.

In the 1920’s, Gertrude Stein published the novel The Making of America, which would go on to be one of her most famous novels. It wrote about the family history of two fictional families.

The 1930’s were a highly productive time for Gertrude Stein, as she published two autobiographies called The Autobiography of Alice B. Toklas and Everybody’s Autobiography. It was a mix of stories which could have been put in a memoir of her own, as well as more stories about her romantic partner, Alice Toklas. In 1938, she wrote the opera Doctor Faustus Lights the Lights, which was a fantastic success in the theater world.

Some of her other famous books are listed below.

How Writing is Written

Novel of Thank You

The Geographical History of America

Things As They Were

Wars I Have Seen

Gertrude Stein was gay, so she was never married, as gay marriage was not legalized during her lifetime. However, she did spend a large portion of her life with her romantic partner, Alice Toklas. The two began dating in the late 1900’s.

Gertrude Stein died on July 27, 1946, in Neuilly-Sur-Seine, France. The cause of her death was stomach cancer. She was 72 years old when she passed away.