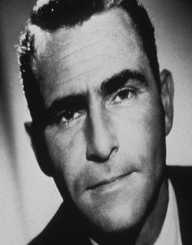 Rod Serling was born on December 25, 1924, in Syracuse, New York, USA. His parents were Esther and Samuel Serling. He also had a brother, Robert. The family later moved from Syracuse to Binghamton, where Rod spent most of his early years.

Ever since Rod Serling was in elementary school, he had a passion for having fun and making people laugh. Most teachers thought he was just an average class clown, but others encourage him to join the school’s drama department, which is exactly what he did while in middle school. He continued to act as he enrolled in the Binghamton Central High School.

After graduating from high school, Rod Serling enlisted in the United States military to fight in World War II. While in the military, he acted as a paratrooper. He later left the army, had he had too many injuries to continue fighting. He earned a Purple Heart for his services in the military.

Rod Serling enrolled in Antioch College after leaving the military. There, he decided to study physical education. He later changed his major and decided to study literature instead. He graduated with a Bachelor’s degree from the college in 1950.

Before working on and behind the camera, Rod Serling was already interested in the entertainment industry. He worked as a writer and as a radio actor for some time before going into film and television. While working on the radio, Rod Serling worked for private stations, college stations, and even for the military. Another job he did for the military was working as a parachute tester.

His most popular off-screen job was his radio job. He both wrote and narrated several radio shows. Some of the programs he wrote were Hop Off the Express and Grab a Local and Leave it to Kathy.

Rod Serling got his first taste of fame when he began to work as a freelance writer for television shows. He often wrote scripts. However, he hated not having the power to stop his scripts from being edited, so he quit the job. He later found a great opportunity for his career when he was hired by the Kraft Television Theatre to turn on of his scripts into an episode. The episode would later be called Patterns. It was so popular, that offers started to roll in from other television networks. Everyone wanted Serling to write for them.

After making it big with Patterns, Rod Serling continued to write for television shows, as well as write some screenplays for various movies. Some of his most popular shows and films are listed below.

Studio One in Hollywood

Possibly Rod Serling’s most famous work was his writing for the show The Twilight Zone. He was responsible for creating the show in 1959. He wrote about 70 episodes for the show and wrote the teleplay for about 20 of the episodes. All in all, the show had 156 episodes before it ended in 1964. The show was later revived in 1985. By this time, Rod Serling was already dead, but the creators of the show still credited him for coming up with the idea. Some of his old screenplays were also used for this revival. This new series only lasted for 65 episodes, but it was just as (or even more) popular as the original run. The show also had a spin-off from the movie: Twilight Zone: Rod Serling’s Lost Classics. The show was revived again in 2002. This series only lasted for 44 episodes, and only one of Serling’s screenplays were used for this revival. This show ended in 2003.

Other big-name television shows he wrote for were The Loner, Night Gallery, and The New People. One of his other big claims to fame was his co-writing of The Planet of the Apes.

During Rod Serling’s long career as a screenwriter, he has won over a dozen awards and has been nominated for almost a dozen more. Some of his most prestigious awards are listed below.

Rod Serling married Carol Cramer in 1948. The couple later had two children together: Anne and Jodi.

In 1975, Rod Serling suffered a heart attack. He survived, but only two weeks later he had another heart attack. He had to get surgery after this heart attack. The surgery did not go well. He died on June 28, 1975, in Rochester, New York, USA. He was 50 years old when he passed away.