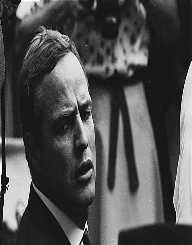 Marlon Brando was not just a talented American actor, and director but also contributed enormously to the film industry. He is credited for introducing realism into film acting. Born on April 3, 1924, he was also a known activist of African-American civil rights movement and took part in several political activities. This gained him popularity not only in the movie industry but across board. He was a two time Academy Award winner for his spectacular performance in the film On the Waterfront which he played Terry Malloy in 1954 and The Godfather in which he played Vita Corleone in 1972.

Some of his famous films are The God Father, A Streetcar Named Desire, Viva Zapata, The Wild One, Julius Caesar, and Apocalypse. Marlon Brando was part of the Top Ten Money Making Stars in 1954, 1955 and 1958.

Marlon Brando Jr. was born in Omaha, Nebraska to Marlon Brando Sr. and Monica Julia. He was the youngest of three children. As a child, Brando did not have a very cordial relationship with his parents because he believed they were uncaring. Brando’s mother, affectionately called Dodie was an actress, but alcoholic and his father later joined in that act. Brando would later in his biography express his disappointment about the type of parents he had. Upon his father’s transfer, the family moved to Evanston, Illinois and later moved to Santa Ana, California with his mother and two sisters after their parents have separated, Marlon Brando was 11 years then. Their parents later reconciled, so the family moved to Libertyville, Illinois, Chicago in 1937.

Marlon Brando acting talent showed up at his young age as he was able to act and imitate friends and others he came across. He had his education at the Libertyville High School but was dismissed for riding a motorcycle on the school corridors.

He was later admitted at the Shattuck Military Academy where he almost got dismissed for the second time for his disrespectful act towards a visiting army colonel. He was suspended and called back after a year, but he decided to drop out. Bando later worked as a ditch-digger and his intentions to join the army also failed. He later moved with his sister to New York where he pursued acting. To sharpen his acting skills, he studied under Stella Adler who taught him the Stanislavski system.

Marlon Brando started his movie career without letting behind his defiant attitude which nearly disrupted his acting career at the early stages. Marlon Brando had debut summer stock role in Sayville, New York onLong Island but was sacked for acts of indiscipline at the production of the New School’s production in Sayville. Marlon Brando would later find his way in Broadway’s drama I Remember Mama where he played as a son of Mady Christians in 1944.  After some back and fronts, he got a role on Truckline Café where his performance led to him being voted as the Most Promising Young Actor by New York Drama Critics. He had roles in other Broadway plays like A Flag is Born and Candida. Brando in 1950 finally had a debut screen role in The Man

In 1951, Marlon Brando started to gain some recognition with his role in A Streetcar Named Desire which was regarded as one of greatest. The film was successful and gained him nomination in the Best Actor category at the Academy Awards. With his growing talent and artistic display, he had a role in Viva Zapata in 1952 and later in Julius Caesar and The Wild One all in 1953.

Marlon Brando popularity reached its peak when he chanced on a role in On the Waterfront where he played Terry Malloy in 1954. His performance and display of was extraordinary and won him his first Academy Award. The movie was also a commercial success earning about $4.2 million in rentals at the North American box in 1954 and also had positive reviews.

He starred in other films like Guys and Dolls, 1955, The Teahouse of the August Moon, 1956, Sayonara, 1957, The Young Lions and The Fugitive Kind in 1960. Brando’s made a debut in movie directing in the film One-Eyed Jacks by Paramount. Since it was his first time, his inexperienced in the field delayed the movie and increased the production cost, and he was later relieved of the post.

The movie eventually had poor reviews. In 1962, Marlon Brando gained a bad reputation with his deviant activities when filming Mutiny on the Bounty; this act would later affect his purse since he was not gaining many roles. Even the roles that he had then were said to be below his standard. His performance also began to decline. Marlon Brando was forced to sign a five year deal with Universal Studios which was very uncharacteristic with him. However, almost all his films with Universal Studio were a commercial flop. Some of the films include The Ugly American, The Appaloosa, Bedtime Story, A Countess from Hong Kong and The Night of the Following Day. All his commercial appears had disappeared and was virtually in shambles.

However, he was able to turn the situation around with his role in The Godfather as Vito Corleone in 1972. His performance won him his second Academy Award in that year. He did several other works from that time. He was a political activist and involved himself in several civil rights movements like the African-American civil rights movement among others.

Marlon Brando married lot of women and had many children. Different sources claim different number but he is said to at least fathered 17 children. Aside women, he also had some encounter with men and is quoted to have said "Homosexuality is so much in fashion, it no longer makes news”.Some of his former marriages are Anna Kashfi whom he married in 1957. The couple had a son Christian Brando on May 11, 1958, and divorced later in 1959. He moved on to marry actress Movita Castaneda in 1960 but also divorced just two years after. They had two children, Miko Castaneda Brando and Rebecca Brando  Marlon Brando met AritaTeriipaia who had featured in his film, Mutiny on the Bounty, and would later become his third wife. The two married in 1962 and that can be said as Brando’s longest marriage since the two lasted for a decade. The couple had two children, Simon Teihotu Brando and Tarita Cheyenne Brando. Teriipaia already had a daughter, Maimiti Brando as well as her niece Raiatua Brado who Marlon Brando adopted. The two divorced in 1972.

The next relationship was with his housekeeper Maria Cristina Ruiz and had three children Ninna Priscilla Brando, Myles Jonathan Brando, and Timothy Gahan Brando. His other children include Stephen Blackehart, Michael Gregor Gilman, Dylan Brando, Warren Angelo Brando and Angelique Brando but mothers of these children are not known. He also adopted a number of children.

Marlon Brando died on July 1, 2004 in Westwood California by respiratory failure and his remains was cremated. Marlon Brando before his death had gained a lot of weight and suffered obesity. He was then diagnosed with Type 2 diabetes. He was a close friend to the late American pop singer, Michael Jackson

Marlon Brando has won several awards for his tremendous performances in movies. He has won two Academy Awards for his role in On the Waterfront as Terry Malloy in 1954 and as Vita Corleone in The God Father in 1972. The American Film Institute named him as the fourth greatest male star that made a debut before or during 1950.

He was also named in the Time 100: The Most Important People of the Century by the TIME magazine in 1999 and the Variety magazine named him as part of the top 10 Icons of the Century.