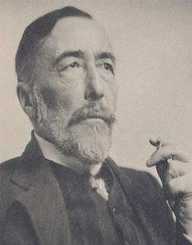 Józef Teodor Konrad Korzeniowski known as Joseph Conrad was a Polish-British novelist and short story writer. Born on December 3, 1857, he is considered one of the greatest English language novelists.

His famous works include Lord Jim, 1900, Nostromo, 1904, The Secret Agent, 1907, and Heart of Darkness. He earned a reputation for the richness of his prose and in-depth insight.

Joseph Conrad was born Józef Teodor Konrad Korzeniowski on December 3, 1857, in Berdychiv, Stolen Land in Ukraine (then in the Russian Empire) as the only child of Apollo Korzeniowski and Ewa Bobrowska. His father was a political activist, writer, and translator who later became a revolutionary.

The family frequently moved due to Apollo’s political activism. In 1861, he was imprisoned in Pavilion X of the Warsaw Citadel for his involvement in a resistant against the Russian Empire. The family went to Vologda on May 9, 1962. Conrad was around four years at the time.

Three years later the family was sent to Chernihiv in northeast Ukraine. Conrad’s mother died of tuberculosis April 18, 1865. Conrad was home-schooled by his father.

His reading of works by Shakespeare and Victor Hugo’s Tailor of the Sea would significantly influence his future works. His father also died of tuberculosis in 1869, and he became orphan at age 11. He was therefore put into the care of his mother’s brother Tadeusz Bobrowski. He had poor health with frequent nervous attack putting his uncle into financial problems.

Joseph Conrad was not a good student, and his poor academic performance became a worry for his uncle. He was however good in geography and fluent in French, German, Latin, and Greek. He also took an interest in Polish Romantic literature and read widely, which set the grounds for his future literary work.

With his poor academic performance, his uncle decided to let him learn a trade. Joseph Conrad chose to become a sailor. He left Poland in 1874 for France, where he worked as a merchant spending almost four years on French ships.

He later joined a British merchant marine and for 15 years served under the Red Ensign. His career at sea will be the theme for most of his novels and stories. He made England his permanent home. He naturalized to become a British citizen on August 19, 1886.

At the age of 36, Joseph Conrad was forced to quit his marine career partly due to ill health, unavailability of ships and his growing interest in writing. In 1895, he published his first novel, Almayer’s Folly, which is set on the east coast of Borneo.

This was when he started using the pen name “Joseph Conrad.” Conrad being familiar with the maritime world and having made many friends in that circle, had most of his works set on that theme. He had most of his works published in newspapers and magazines and reviews including The Fortnightly Review, North American Review, Savoy, The Saturday Evening Post, Harper’s Magazine, Daily Mail, and New York Herald among several others.

Almayer’s Folly along with his second novel, An Outcast of the Islands, 1896, set the basics of his later reputation as a romantic teller of exotic tales. From 1898 to 1906, he wrote for the imperialist weekly magazine, The Outlook. He published The Nigger of the ‘Narcissus,’ 1897 and Heart of Darkness, 1899, his most famous work, set on his stay in Congo. Other works that followed include Lord Jim in 1900, Nostromo, 1904, The Secret Agent, 1907 and Under Western Eyes in 1911.

Joseph Conrad at the age of 20, attempted suicide in March 1878 by shooting himself in the chest with a revolver. According to his uncle, Conrad was highly indebted and believes he attempted the suicide due to depression.

Joseph Conrad married an Englishwoman, Jessie George in March 1896. She was sixteen years Conrad’s junior. They had two children, John and Borys. Conrad died on August 3, 1924, at his Oswald's home in Bishopbourne, Kent, England. He was buried at Canterbury Cemetery.