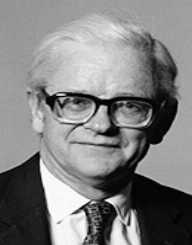 John Kendrew was born on March 24, 1917. He was an English biochemist and crystallographer. In 1962, he received the Nobel Prize in Chemistry jointly with Maz Peutz for their studies of the structure of globular proteins.

John Kendrew was born on March 24, 1917, in Oxford, United Kingdom. He was born to Wilford George Kendrew and Evelyn May Graham Sandburg who was an art historian. In 1923, he joined Dragon School where he studied until 1930. He later attended Clifton College. After graduating from Clifton College, he joined Trinity College in Cambridge. At the college, he studied mathematics, physics, chemistry, and biochemistry. In 1939, he graduated from the college. During World War II, he researched reaction kinetics under the supervision of Dr. Moelwyn Hughes.

John Kendrew later worked on radar at the Air Ministry Research Establishment. In 1940, he began working at the Royal Airforce Headquarters under Sir Robert Watson Watt as a Wing Commander. He was later posted in the Middle East and South East Asia. Before he returned to the United Kingdom, he started researching the structure of proteins.

In 1946, John Kendrew returned to the United Kingdom and met Ferdinand Perutz who was working on the structure of hemoglobin at the Cavendish Laboratory. He later met physiologist Joseph Barcroft who suggested that he should make a similar protein crystallographic study of adult and fetal sheep hemoglobin. He began his doctoral research under Perutz and in collaboration with Sir Lawrence Bragg. In 1947, he became a Fellow of Peterhouse. In the same year, he also established Medical Research Council Unit for Molecular Biology in the Cavendish Laboratory in collaboration with Perutz.

In 1949, John Kendrew obtained his Ph.D. Degree. In 1953, he discovered the Multiple Isomorphic Replacements Technique. He later moved to the Royal Institution of London with Bragg and Perutz. In 1954, he and Perutz became the Honorary Readers of the Davy Faraday Research Laboratory at the Royal Institution. In 1957, he discovered the structure of protein myoglobin. In 1959, he came up with a high resolution of the structure of myoglobin since other pictures of the same were blurry. Perutz was also able to describe the structure of hemoglobin.

In 1964, John Kendrew founded the European Molecular Biology Organization. In 1974, he was appointed the Director of the European Molecular Biology Laboratory, Heidelberg. In 1981, he retired from the post at the laboratory. In the same year he was appointed President of St. John’s College, Oxford University. He later returned to Cambridge where he became an Honorary Fellow of Trinity College and Peterhouse.

In 1962, John Kendrew received the Nobel Prize in Chemistry jointly with Perutz for their studies of the structure of globular proteins. In 1965, he received the Royal Medal from the Royal Society. In 1967, he became a Fellow of the America Society of Biological Chemists. In 1974, he became a companion of the British Empire.

John Kendrew was a bachelor all his life. He died on August 26, 1997, in Cambridge. He died at the age of Eighty.