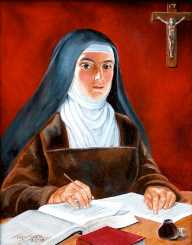 Saint Teresa of Avila was born on March 28, 1515, in Gotarrendura, Ávila, Spain. She was born formerly as Teresa de Cepeda y Ahumada. She was born to Alonso Sánchez de Cepeda and Beatriz de Ahumada y Cuevas. She had an interest in religious activities and the Saint’s lives. She took long hours of prayers. She prayed for the poor and the needy. She was innocent and kind hearted. She was at most committed towards Virgin Mary after the death of her mother. She developed enthusiasm in reading popular fiction. She had a socializing trait. She joined Ávila’s Augustinian nuns. She became Carmelite Order nun. She led a spiritual life.

Saint Teresa of Avila joined the convent. She strengthened her spiritual life. In 1560, she got acquainted with Saint Peter of Alcantara, a Franciscan priest. She had him as a guide and counselor. She later found a reformed Carmelite covenant. She worked on her objective with the help of Guimara de Ulloa. She also convinced the Jewish converts to embark to Christianity. In 1562, she formed St. Joseph renown ‘San José,’ her new monastery. She later established her order new houses.

In 1567, Saint Teresa of Avila started forming new reform convents at Medina del Campo, Malagón, Valladolid, Toledo, Pastrana, Salamanca and Alba de Tormes. She set up men houses for those who had the urge to take over the reforms. She also contemplated solitude in God’s name. She wrote on Mental Prayer.

Saint Teresa of Avila promoted Roman Catholicism. She continued forming reform convents. She died on October 4, 1582, of illness while on her journey from Burgos to Alba de Tormes. She died at the age of Sixty-seven.