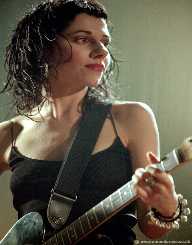 PJ Harvey is an English musical artist who pursued a solo career after being a member of Automatic Dlamini and the PJ Harvey Trio. Aside from winning a number of awards for her contribution to the English musical industry, she is also a practiced artist, sculptor and has published her poetry. Harvey is the recipient of the Mercury Music Prize in 2001 and 2011, the only artist to be awarded the same award twice.

Aside from the number of accolades she attained from her music involvement, Harvey was also appointed in 2013 as a Member of the British Empire by Queen Elizabeth II.

PJ Harvey was born as Polly Jean Harvey on October 9, 1969, to Ray and Eva Harvey in Bridport, Dorset. She was the second of two children, with an older brother named Saul. Harvey grew up in the family’s farm located at Corscombe and attended a school near Beaminster. Both of Harvey’s parents were fans of Bob Dylan and introduced his music to her which later influenced her music-writing as well.

She received her first guitar lessons from Steve Knightley, a known folk singer, and songwriter. In her teenage years, Harvey picked up the saxophone instrument when she became a part of an instrumental group in Bologne. Upon graduating from secondary school, she proceeded to enroll at Yeovil College where she pursued a course in visual arts.

PJ Harvey launched her professional musical career by becoming a member of Automatic Dlamini in July 1988. The group was founded by John Parish back in 1983, and she was added later on and provided guitars, backing vocals, and saxophone in the group’s music. Harvey left the band after three years in 1991 and formed her band in with former members Rob Ellis and Ian Oliver. Despite her departure to the band, she continued being in good graces with the members especially with Parish whom she considers as her musical soul mate.

Harvey’s group which formed in January 1991 took to her name as the band’s official name. They made their debut performance in April 1991 at Charmouth Village Hall. Their debut single entitled Dress was released in October of the same year under Too Pure record label. The following year in 1992, they released their studio album entitled Dry which received international acclaim. The band went on tour on several occasions but ultimately ended with disbandment on September 1993.

Harvey as a Solo Artist

Upon her band’s disbandment, PJ Harvey went under the management of Paul McGuinness, U2’s manager at the start of her solo career. She released her first album in 1995 entitled To Bring You My Love, where she collaborated with a number of other artists, including former bandmate John Parish. The album included tracks which were well-received by the public such as Down by the Water, C’mon Billy, and Send His Love to Me. The following year, she entered a relationship with Nick Cave of which the couple’s breakup inspired her next album entitled The Boatman’s Call which was released in 1997.

She released her follow up the album in 1998 entitled Is This Desire?, which became a nominee for Best Alternative Music Performance at the Grammys. Two years later in 2000, she released Stories from the City, Stories from the Sea which was the product of her work with Rob Ellis and Mick Harvey. The album led her to Best Female Artist nomination at the BRIT Awards, and she was nominated twice at the Grammys under the category of Best Female Rock Performance and Best Rock Album.

In May 2004, PJ Harvey released her album Uh Huh Her which she produced herself and went n tour to promote the album. It was a commercial success with an alternative rock vibe followed by the 2011 album entitled Let England Shake. Her next album release was on April entitled The Hope Six Demolition Project which topped the UK album charts.

Besides her career in music, Harvey also acted on selected occasions wherein she made an appearance at the 1998 film The Book of Life as the character Magdalena. She also has a number of her sculptures on display at the Bridport Art Centre’s Lamont Gallery.

In 2015, she published The Hollow of the Hand, a collection of poetry which was the product of her collaboration with Seamus Murphy, a photographer.