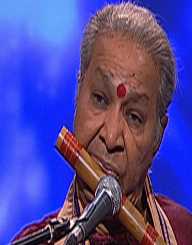 Hariprasad Chaurasia is a well known Indian Classical flutist who plays the Indian bamboo flute (bansuri). He plays it in the north Indian classical style and has popularized Indian classical music all over the world. As a musician, he is a combination of both an innovator and traditionalist.

Hariprasad Chaurasia has expanded the possibilities of Classical North Indian Flute music through his masterful blowing technique and unique adaptation of alaap and jod to the flute.

Hariprasad Chaurasia was born on 1st Jul 1938 in Allahabad, India. His mother died when he was six years old. His father was a wrestler and wanted his son to pursue the same profession. Hariprasad was however born with a love for music and wanted to follow his passion. When he was 15, he secretly trained in classical vocal music under Pandit Balaram who was his neighbor.

Hariprasad Chaurasia was deeply influenced by Pandit Bholanath Prasanna, a famous flutist and trained under him for eight years. He also continued to train as a wrestler. Later in an interview, he is known to have said that the training as a wrestler helped him build stamina and lung power needed as a flutist.

In 1957 he joined the All India Radio (AIR) Cuttack, Odisha as a regular staff artiste. In 1960 he was transferred to Mumbai. In Mumbai, he met Annapurna Devi, the daughter of Baba Allaudin Khan.

Hariprasad Chaurasia expressed his desire to become her student. She accepted on condition that he switched from right hand to left hand playing. Hariprasad agreed. With her guidance, he became an accomplished flutist and left AIR to pursue an independent career. Hariprasad succeeded in making a name as an eminent flutist. His determination and talent made him famous not only in India but all over the world. He continues to tour regularly to the US and Europe and features in almost all the music festivals around the globe.

In 1960’s he teamed up with the santoor player Shivkumar Sharma, and they performed ‘Shiv Hari.’ They released an album called ‘Call of the Valley’ in 1967. This became popular all over the world. The duo also composed the musical score for Hindi films like Silsila, Chandni, Lamhe, Darr, etc. He has also composed many other musical compositions. His experimental album ‘Eternity’ which incorporated western elements with Indian Classical music went on to become a platinum disc. Hariprasad played on the song ‘The Inner Light’ that was featured on the B side of the Beatles single Lady Madonna. George Harrison composed it.

Hariprasad Chaurasia also teaches at the Rotterdam Music Conservatorium where he is the Artistic Director of the Indian Music Department.

Hariprasad Chaurasia has received many awards and titles. Some of the noted ones include the following. The Indian Government conferred on him the Padma Bhushan Award in 1992 and the Padma Vibhushan Award in 2000 for his contribution to the field of arts. Hariprasad Chaurasia was appointed as Knight in the Order of Arts & Letters by the Ministry of the culture of the Republic of France in 2009. This was in appreciation of the contribution he has made to spread culture in France and the rest of the world.

Hariprasad Chaurasia was honored by The Dutch Royal Family at Amsterdam and was conferred the title Officer in the order of Orange-Nassau and was honored by Princess Maxima herself.

In 2013 a documentary film ‘Bansuri Guru’ which features the life and legacy of Hariprasad Chaurasia was produced by Films Division, Government of India. His son Rajeev Chaurasia directed it. Two books have been written about him. One is his Official biography “Woodwinds of Change” written by Surjit Singh (2008), and the other is by Henri Tournier titled “Hariprasad Chaurasia and the Art of Improvisation.”

Hariprasad Chaurasia married Kamla Devi in 1957. They have two sons Ajay and Vinay. Later he married Anuradha Roy and had a son Rajeev with Anuradha.