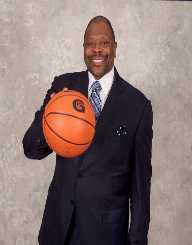 Patrick Ewing is a famous Jamaican-American retired basketball player. Currently, he is the head coach of Georgetown Hoyas. Patrick Ewing migrated to America, and it was not easy at the beginning. Ewing enrolled in a college- prep program which was for financially disadvantaged high school students. He devoted his life to playing basketball, and this gave him the opportunity to enroll in Georgetown University and later served as the team leader. In 1984 and 1992, he won gold medals that saw him through to induction into the basketball hall of fame.

Patrick Ewing was a son of Carl and Dorothy Ewing on August 5, 1962, in Kingston, Jamaica. His father was a mechanic while his mother was a housewife. They were not financially stable and so Ewing was left to look after his siblings for four years until his parents were stable enough for the family to migrate to America in Cambridge, Massachusetts. He schooled at Cambridge Ridge High.

Ewing was an excellent cricket and soccer player, but through the mentorship, he acquired from John Fountain and interacting with his neighbors, he learned how to play basketball. Being well fit for the game, he was able to learn faster. However, he had to focus on his studies to improve his academic performance.

Patrick Ewing put a lot of effort while in Cambridge both in his studies and sports. In 1980, Ewing tried for the Olympic team, but unfortunately, he did not qualify. He also led his team in winning some championships.

When Patrick Ewing joined Georgetown, he signed up to play for Coach John Thompson. He officially announced the decision to his fans who expected him to play for Boston University. During his leadership at Georgetown, his team led in 'The national championship game.'

In 1984, Ewing became the most outstanding “All American three times player.” for the division one tournament replacing the renowned player Hakeem Olajuwon. He attempted the trials for the U.S Olympic basketball team and was successfully accepted. In 1985 he was selected for the NBA by the Knicks who had won the draft lottery.

Despite the injuries during his career, Ewing was able to earn an average of 20 points, nine rebounds and two blocks per game for the Knicks which earned him the title, NBA rookie of the year. Ewing was selected an NBA all-star 11 times and led the team to 13 playoff appearances, and eventually became a member of the original dream team during the 1992 Olympic games.

For approximately 15 years Patrick Ewing played for the Knicks and was fortunate to play with famous players like Hakeem Olajuwon, Michael Jordan, and Scottie Pippin. He then left the Knicks in 2000 and joined Seattle Supersonics where he only stayed for one year. In 2001, he acceded to the Orlando magic until he announced his retirement on September 18, 2002, and in 2007 he became the assistant coach for the team.

Ewing joined the Washington Wizards as an assistant coach to Kwame Brown. Later on went to the Houston Rockets to assist its coach Yao Ming and has continuously helped him improve his coaching skills. On February 18, 2003, Ewing’s jersey retired in a ceremony at Madison square garden.

Patrick Ewing was a member of the two gold medal-winning Olympic basketball teams including the famous Dream team which was composed of NBA superstars. After winning the NCAA championship, he emerged as the winner of gold medals in the 1992 U.S men’s Olympic. In 1996, he earned a rank of the 50 greatest players in NBA history. In 2008 he was inducted into the Naismith Memorial Basketball Hall of Fame.

Ewing scored 24,815 points, and the NBA ranked him position 18 on the scorer's list in 2014. In 2017, Georgetown University named Ewing as men’s head basketball coach.

Patrick Ewing’s mother passed on in 1983 from a heart attack. Sources reveal that not so long after his mother’s death, his high school soul mate Sharon Stanford was expecting their child while he was still in college. Patrick Ewing Jr was born on May 21, 1984. In 1990, he married Rita Williams with whom they have two daughters Corey and Randi.

He was at the beginning afraid of how he was going to manage to support his child and concentrate on his studies. Loyally, he remembered he had to keep the promise he made to his mother of completing his education. Ewing turned down the offers that came his way until his graduation in 1985.

Patrick Ewing led Georgetown to an NCAA championship and was named the national player of the year in 1985.