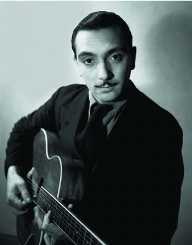 Gypsy Jazz great Django Reinhardt was born Jean Reinhardt on the 23 January 1910 in Belgium into a Roma family who traveled around France and Belgium. He came from a musical family as his father was a musician and his mother a dancer.

Django Reinhardt was not formally educated but was homeschooled, and his musical education was provided by his family.

Django Reinhardt was taught the violin as a child, and by the age of seven, he would play in his father’s dance band. He later taught himself to play the banjo-guitar and played in dance halls and on the streets of Montmartre, Pigalle, and Belleville. He initially played French music of the day and became known at local clubs in Paris.

Then in the 1920s, he discovered American jazz music including the music of Louis Armstrong and Duke Ellington which influenced him. He played with musicians Victor Marceau, Jean Vaissade, Maurice Alexander and the singer, Maurice Chaumel.  In 1928, he damaged his hands in a domestic fire and permanently lost the use of two of his fingers.

After a period of rehabilitation and healing, he adapted his playing style to compensate for his disability, and in 1930, he began performing again.

Along with his brother Joseph, he joined forces with violinist Stephane Grappelli, and they formed the Quintet of the Hot Club of France. This Quintet was Europe’s first major jazz band, and they quickly built up a strong following playing American jazz cover songs. Around this time in the 1930s, Reinhardt began to merge his style with swing and jazz and developed his particular style which became known as gypsy swing.

When World War II broke out in 1939, Reinhardt was at risk because the Roma people were targeted by the Nazis, with many of them died in concentration camps during the conflict.

Unsuccessful in two escape attempts, Reinhardt remained in Paris, playing in the clubs and was largely ignored, some felt because Nazi officers who frequented the clubs were aware of his talent.

After the war ended, Reinhardt played with Grappelli in the UK as well as touring the United States where he appeared at the Cleveland Music Hall with Duke Ellington and His Ostrchera. He also had the chance to meet and play with other American musicians and play at the Carnegie Hall in New York.

After returning home in 1947, Reinhardt continued to play music with Grappelli but otherwise developed a reputation for unreliability. In 1949, he recorded his music in Italy with Grappelli and three Italian jazz musicians. He moved to Fontainebleau in France while still playing at jazz clubs in and around Paris. He also continued recording his music.

Django Reinhardt was a hugely influential guitarist, believed by many to be one of the most important guitarists in history. He left a legacy of over 100 original compositions. Festival Django Reinhardt is held in France annually. Jamie Kramer produced a documentary film Djangomania (2005) which explored the impact of Reinhardt’s music on musicians worldwide.

In his late teens, Reinhardt married Florine Mayer in a gypsy ceremony. Their son Henri Reinhardt was born in 1929, and the couple separated not long afterward. His second wife was Naguine, and they had a son Babik.

Django Reinhardt died in France on the 16 May 1953 after suffering from a stroke.