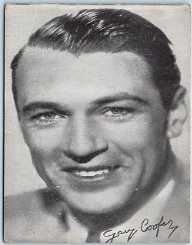 Franks James Cooper best known as Gary Cooper was an astute American actor whose movies spanned from the end of the silent film era to the golden age of classical Hollywood. Born on May 7, 1901, his natural and authentic acting style coupled with his persona won him appeal to all sexes. He starred in varieties of films including comedy, drama, war, romance, crime and Western movies. Making an acting debut as an extra and stunt rider his popularity on the screen grew with his extraordinary and effortless talent skills throughout his career.

Gary Cooper established himself first as a silent actor and became a Western hero before moving on to sound pictures in 1929 starring in The Virginian. He became a household with films like A Farewell to Arms, 1932, The Lives of a Bengal Lancer, 1935, Mr. Deeds Goes to Town and Meet John Doe among several others. Cooper won several awards including three Academy Awards, two Best Actors and the other an Honorary Award for career achievement.

Frank James Cooper was born on May 7, 1901, in Helena, Montana to Alice and Charles Henry Cooper. His father, an immigrant from Houghton Regis, Bedfordshire was a lawyer, rancher and a Montana Supreme Court justice. Alice enrolled Cooper and his elder brother Arthur at the Dunstable Grammar School in the United Kingdom for them to have lessons in the English language from 1910 to 1912. The two brothers in company with their mother returned to the United States where Cooper later enrolled at Johnson Grammar School in Helena. Cooper had a hip injury during a car accident at age sixteen. Upon the doctor’s advice, he had to recuperate by horseback riding, therefore, his return to the family ranch.

However, lack of supervision during this period resulted in stiff, off-balance walking characteristics. In 1918, Gary Cooper left school and returned to the ranch as a full-time cowboy, but his father would arrange his completion from high school at Gallatin County High School a year later. It was during this time that his English teacher, Ida Davis encouraged him to prioritise his education and get involved in the school’s quiz and drama team. This advice set the prelude for Cooper’s future acting career. He since had an interest in art and took some art courses at the Montana Agricultural College in Bozeman in 1920 and continued with it at the Grinnell College in Iowa in 1922.

During this period, Gary Cooper took inspiration from Western paintings of Charles Marion Russell and Frederic Remington. Even though he was not accepted in the school’s drama club, his interest in drawing and watercolour gained him the art editor for the college yearbook. It was during 1924 when he joined his parents in California for Thanksgiving that he met Jim Galeen and Jim Calloway who were casting as extra and stunt riders in a low-budget Western films at a small studio on Poverty Row. With further introductions and having met the casting director, Copper resolved to work as a film extra for a fee of five dollars a day.

After playing several extras and stunt riders roles in low budget films, Gary Cooper began a professional film career in 1925 playing roles in silent pictures including The Thundering Herd, Wild Horse Mesa, Riders of the Purple Sage and The Trial Rider among others. He later hired the services of a casting director Nan Collins as his agent. Collins would then suggest he change his name from Frank to Gary since most actors in the industry were using the name Frank Cooper, a suggestion Cooper accepted. He had several roles in non-Western films like The Eagle, 1925, Ben-Hur, 1925 and The Johnstown Flood in 1926.

Gary Cooper's acting skills kept developing, and he began to land some credited roles in films like Trick and the short movie Lightin’ Wins. After several productions, Cooper gained the attention of some film studios and in 1926 signed a contract with Samuel Goldwyn Production for a fifty dollar fee per week. That year, he had his debut significant role as a young engineer in The Winning of Barbara Worth. Cooper’s performance in the film was highly praised by critics with some referring him as a dynamic new personality and future star. After that movie, he had a better offer from Paramount Pictures and signed a five-year contract of $175 a week.

Cooper’s good relationship with actress Clara Bow gained him roles in high profile films like Children of Divorce and Wings in 1927. Wings later became the first film to win an Academy Award for Best Picture. Several other prominent roles came in Coopers leading to his debut starring role in Arizona Bound and later in Nevada. Cooper displayed his natural and authentic acting style throughout his films which won him several fans among both sexes. Nonetheless, he kept on developing with each film.

Gary Cooper starred in Paramount’s The Legion of the Condemned and The First Kiss in 1928. Cooper just didn’t just gain popularity but it also came with an increased purse. At this time, he was earning as much as $2,750 per film and was paired with leading actresses at the time like Evelyn Brent, Florence Vidor and Esther Ralston.

Hollywood Stardom And Others

Acting in the silent picture since the start of his movie career, Gary Cooper had a smooth transition to the new sound pictures making a debut in The Virginian in 1929 and later in Morocco, 1930 and displayed it in several other films. He played several acting roles in Hollywood films and with a contract renewal from Paramount; he earned $4,000 per week. His other films include Devil and the Deep, 1932, Today We Live, 1933 and The Lives of a Bengal Lancer. He also appeared in other like Springfield Rifle, 1952, Return to Paradise, Love in the Afternoon, 1956 and the They Came to Cordura among several others.

Gary Cooper got involved in several relationships before and after his marriage. The series of relationships started with Clara Bow in 1927 who helped him a lot in his career. Just a year after, he dated Evelyn Brent and later dated Lupe Velez in 1929. Another relationship started in 1930 with Marlene Dietrich while filming in Morocco, Carole Lombard in 1931 and a married woman Countess Dorothy di Frasso from 1931 to 1932.

Cooper eventually got married to Veronica Balfe in 1933 and had a daughter Maria Veronica Cooper on September 15, 1937. Though he was able to remain faithful for a while, Cooper went into his old way by dating Ingrid Bergman in 1942 during the production of For Whom the Bell Tolls and later actress Patricia Neal. Cooper'sinvolvement with Neal came to limelight, and his wife Maria got to know of it. This caused the couple legal separation in May 1951 as Cooper confessed he was genuinely in love with Neal.

Gary Cooper continued to date the likes of Grace Kelly, Lorraine Chanel, and others. Maria and Cooper reconciled in February 1954. Cooper died on May 13, 1961, after undergoing several surgeries and deteriorated health.

Gary Cooper received several awards including two Academy Awards for Best Actor in 1942 and an honorary award in 1961. Other awards include New York Film Critics Circle Award, 1937, Photoplay Award, 1952 and a Golden Globe in 1957.