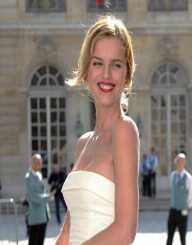 Eva Herzigova was born on March 10th, in 1973. Her place of birth was in Litvínov, Czechoslovakia-which is now referred to as the Czech Republic. She is a professional model and an actress. She has been in the modeling industry for more than 20 years now. She has featured in numerous commercials for renowned organizations. During the 90s, her modeling career was at its peak, and she is therefore recognized as one of the 90s supermodels. Other models that competed with her during this time include Naomi Campbell, Helena Christensen, Claudia Schiffer and many more.

Eva Herzigova was born on March 10th, 1973. She has two other siblings in their family. Her father worked as an electrician whereas her mother earned money through her secretarial job. While Herzigova was still young, she was an active member of sports. Some of the activities that she engaged in are gymnastics, cross-country skiing, track, and basketball.

At the beginning of her modeling career, Eva Herzigova had the thoughts that her sister was indeed better than her and that she could perform better as a model. However, her sister was reluctant in trying her luck in the modeling industry. During one of the competitions which occurred in 1989, Herzigova decided to compete, and to her surprise, she emerged the winner of the contest. This motivated her to pursue her modeling career seriously.

With time, Herzigova popularity rose as she featured in different advertisements. Things got better when she moved to France. She made an essential appearance while advertising the Wonderbra. The advert was a major hit as it earned Herzigova the recognition that she needed to become a star in the modeling industry. Nonetheless, the ad was faced with numerous controversies because it demeaned women.

Around this period, Herzigova also featured in Guess?- Which was a jeans campaign. Other magazines that have featured her include Vogue and Harper's Bazaar. Notable designers that she has worked with are Louis Vuitton, Versace, Emilio Pucci and Giles Deacon.

Eva Herzigova also featured in some films while still working on perfecting her modeling skills. Some of the movies that she featured in during the 90s are Inferno-1992, Les Anges gardens-1995, and My Best Friend's Wife-1998. In 2000, she played the role of Christine in Just for the Time Being. Four years later, she played a lead role in Modigliani. Recently, in 2013, she featured in a thriller film called Cha cha cha. She was playing the role of Michele.

Eva’s first marriage was to Tico Torres, who is a musician. Their relationship lasted for only two years before they separated. In 2002, Eva Herzigova entered into another relationship with Gregorio Marsiaj, an Italian businessman. Through their shared love for one another, the pair has three children.