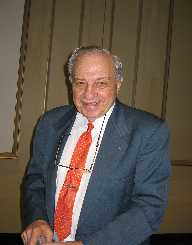 Jerome Karle was born on June 18, 1918, in New York, USA. His parents were Sadie (Kun) and Louis Karfunkle.

As a boy, Jerome’s mind couldn’t have been further away from the sciences. Jerome’s mother was a pianist, and she taught her son everything she could. For years, Jerome Karle trained to become a successful musician one day. He participated in several contests (and even won a few) as a boy. It was later on that he realized that he didn’t like to give performances. Once he made this discovery, he spent much of his time studying science. Of course, that wasn't all that entertained his young brain. He also loved to play sports, but he saw that more of a hobby than a career path, unlike science.

As a child and teenager, Jerome Karle attended mostly public schools in New York. Once he proved that he had more talent than the average students in his school,  he transferred to Abraham Lincoln High School. At this school, he studied more advanced topics, like Chemistry. After graduating from high school, he enrolled at the City College of New York. This school was far from his home, which made it difficult for Karle to practice both science and have a hobby in music. In the end, he picked science over music. After graduating from the City College, Karle attended Harvard to further study science. There, he earned his Master’s degree in Biology. He later attended the University of Michigan where he studied science further. There, he earned his Ph.D.

After graduating from Harvard, Jerome Karle went to work with the New York Health Department to earn money so he could one day return to school to gain more degrees. While working with the Health Department, he helped to make it safe for fluoride to be put in the water supply. Once he earned enough money from this job, he went back to school. After earning his Ph.D., he began work on the Manhattan Project.

During World War II, the United States began a secret project, which the government called, The Manhattan Project. The goal of this project was to create a more powerful bomb than the Axis powers (Germany and its allies in WWII) could ever make. The project was anything but small. Thousands of different kinds of scientists from countries all over the world worked together to complete this project. Jerome Karle, as well as his wife, Isabella Lugoski, were key contributors to this project. With his knowledge of chemistry and crystallology, Jerome Karle was able to provide the government with key information to help to create the atomic bombs. When Jerome Karle worked on the project, it was nearing its close. Soon after the project, he went on to focus on other aspects of his career.

After working on the Manhattan Project, Jerome Karle continued working in the science field. His next job at the Naval Research Laboratory. Karle’s wife also worked at the laboratory with him. While at the laboratory, he worked especially with crystallology, the study of crystalline structures. Jerome Karle worked closely with his wife in the laboratory from the late 1940’s until 2009. While there, the couple also worked with X-rays and published papers on their discoveries. Also, in the 1970’s and 1980’s, Jerome Karle worked with other scientists to continue his studies in crystallology. Some of the scientists he worked with included Herbert Hauptman, Alfred Lowrey, and Peter D’Antonio. This group of scientists worked more with X-rays and crystals and made mathematical equations to measure this. Jerome Karle and his wife retired from the Naval Research Laboratory in 2009 together.

Jerome Karle was inducted as the president of the American Crystallographic Association in 1972.

He joined the National Academy of Sciences in 1976.

Jerome Karle won the Nobel Prize in Chemistry in 1985 for his work in crystallology.

Jerome and Isabella Karle were both awarded the Department of the Navy Distinguished Civilian Service award.

Jerome Karle mat Isabella Lugoski in 1940. They married two years later. Together, the couple had three children: Louise, Jean, and Madeleine. All three daughters grew up to be scientists like their parents.

Near the end of his life, Jerome Karle was diagnosed with liver cancer. This cancer ultimately caused his death. Jerome Karle died on June 6, 2013, in Annandale, Virginia, USA. He was 94 years old when he passed away.