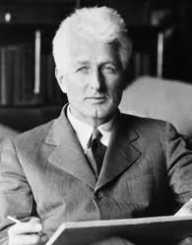 Frederick Maxfield Parrish was an American painter and illustrator. Born on July 25, 1870, is best known for his unique neo-classical imagery throughout his career that spanned for about five decades. Parrish gained commercial success for his works during the first half of the 20th century with his painting Daybreak, being the most famous art print of the time.

Frederick Maxfield Parrish was born on July 25, 1870, in Philadelphia, Pennsylvania to Elizabeth Bancroft and Stephen Parrish. His father was a painter and etcher. Growing up in a Quaker society, Parrish, started drawing at a very young age. His parents discovered his drawing talent and supported his art. Parrish and his parents travelled through Europe, visiting countries like France, England, and Italy. During this period, he was exposed to paintings by the old masters and great architectural works.

Maxfield Parrish also studied at the Paris school of a Dr. Kornemann. He later continued his education at Haverford School and then at the Haverford College, where he spent two years from 1888 to 1890. Deciding to take arts as a career, Parrish enrolled at the Pennsylvania Academy of the Fine Arts, where he studied under Thomas Pollock Anshutz and Robert Vonnoh from 1891 to 1894.

After graduating, he moved to into to his father’s studio at Annisquam, Massachusetts, where they worked together. Parrish later furthered his education at the Drexel Institute of Art, Science & Education in 1895, on his father’s behest.

Maxfield Parrish's artistic career spanned for more than five decades, during which he contributed to the sharping of the Golden Age of illustration and American arts. His artworks numbered about 900, including magazine covers, posters, advertising illustrations, and calendars, with his earlier works being n black and white. He produced works for Harper’s Bazaar, Hearst’s, Life and Scribner’s Magazine among others.

In 1887, he illustrated the children book, Mother Goose in Prose, by L. Frank Baum. He became a member of the Society of American Artists in 1900. He became very famous in the 1920s and was the highest paid commercial artist in the US. His commercial works included an illustration for Eugene Field’s Poems of Childhood in 1904, Arabian Nights, 1909.

From 1904 to 1913, Maxfield Parrish worked with Collier’s with six years being an exclusive deal. His illustration works are featured in A Wonder Book and Tanglewood Tales, 1910, The Golden Treasury of Songs and Lyrics, 1911, and The Knave of Hearts, 1925. Aside from illustrations for books, he created advertising works for companies like Colgate, Wanamaker’s, Oneida Cutlery, and Edison-Mazda Lamps.

In 1916 and 1923, Parrish painted adverts for D.M. Ferry Seed Company, and that increased his popularity. In 1923, Parrish produced his famous work, Daybreak, featuring women in a landscape scene.

Maxfield Parrish decided to reduce his illustrations for children’s book and began to focus on large paintings in the 1940s. His paintings usually featured androgynous nude in fanatical settings. His popularity declined during these periods, but his earlier worked sustained his legacy. His later works were mainly landscapes.

Maxfield Parrish married Lydia Ambler Austin on June 1, 1895. After their marriage, they moved to Philadelphia and later to Cornish, New Hampshire where they built their “The Oak” home. In the 1890s, he suffered from tuberculosis but was able to recover from it. The couple had four children. Parrish died on March 30, 1966, at age 95, in Plainfield, New Hampshire.