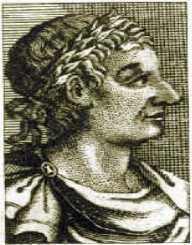 Ovid was born 20th March 43 BC. He was born into a family who was well-known for their equestrianism. Known as Ovid, he was born in Sulmo (now called Sulmona), which is about 90 miles east of Rome. Ovid was born at a very important time in history. A year before he was born, Julius Caesar had been murdered. This caused several civil wars, until eventually the nephew of Caesar, named Octavius, defeated Mark Antony. Antony had been the main supporter of Caesar. Once Octavius triumphed, a new political regime moved into place. Octavius changed his name to Augustus, and it was under his rule that Ovid lived.

Both Ovid and his brother were schooled in rhetoric. Their teaching took place in Rome, under Arellius Fuscus, and Porcius Latro. Ovid was learning rhetoric in relation to law, which was what his father wanted, and his brother excelled in public speaking.

Ovid’s brother died at 20 years of age, and this was a turning point for Ovid. He began to travel – to Athens, Asia Minor and Sicily. He held several public appointments, but around 29-25 BC he decided to concentrate on poetry, thus resigning from the position he held at that time.

The first recital by Ovid was around 25 BC. He was 18 at the time. Ovid was part of the group that came under Marcus Valerius Messala Corvinus. He was also friends of those in the circle of poets under Maecenas, who was a political advisor and ally to Augustus.

Ovid penned many works, and in the first 25 years of writing his poetry, his themes were love and erotica. It is thought one of his first works was Heroides.

Under the rule of Augustus, society was being morally shackled, and it is thought this was one of the reasons Ovid became so popular, due to the subject of his writings. During 8 AD, Augustus sent Ovid into exile. He was sent to the fishing town of Tomi, which was a bleak, uninteresting place. Although he continued to write, his work was never the same.

Ovid said his exile was due to “a poem and a mistake.” He was exiled directly by Augustus, with no senate or other hearing, and nobody knows the reason why it happened. Ovid did try, through his poems, to return to Rome, but he was never allowed. He died in exile in 17 AD.

Around the same time as Ovid’s exile, the grandchildren of Augustus, Julia the Younger, and Agrippa Postumus, were also exiled. Julia’s husband was executed for conspiracy against Augustus. It is thought Ovid may have known about the conspiracy.

Ovid wrote while in exile, but his work was full of despair and sadness due to his exile. Some scholars have put forward that he may not have been in exile at all, as he is the only one who talks about it, but the general tendency amongst scholars refutes this hypothesis.

Although Ovid had several major works, his most famous was Metamorphoses. It is a very lengthy poem, totaling approximately 12,000 lines, written in dactylic hexameter. Dactylic hexameter is also known as the “grand style of classical poetry.” The work was 15 volumes in length.

By the time he was 30, Ovid had been married three times. He was divorced from his first two wives, and forcibly separated from his third wife when he was sent into exile. She was well connected though and was able to help him while he was in exile. Ovid had one daughter, who also bore him grandchildren.

Ovid has a statue in his honor, located in his hometown of Sulmona, Italy.

Legacy from his poetry is mixed. He has fallen in and out of favor over the centuries, depending on social and religious outlooks at any given time. He was, though, the first great poet to arise under the rule of Augustus. His poetry had a huge influence on writers during the Middle Ages and the Renaissance. The 12th century was even called the Ovidian age for the number of poets writing in Ovid’s style.

Ovid’s work has also been translated by different writers – his poetry has lived on, long after his death.