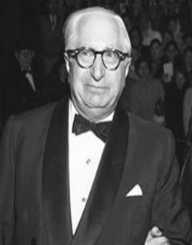 Louis B. Mayer was born on July 12th, 1884. As a film mogul, he is best remembered for being one of the co-owners of Metro-Goldwyn-Mayer studios. The studios were established in 1924. During his management tenure, the studios were well known as they pulled together a string of famous directors, writers and some of the best film actors in Hollywood.

Louis B. Mayer was born on July 12th, 1884. His place of birth was in Minsk, Russia. He was the son of Sarah Meltzer and Jacob Meir. When Mayer was young, he left school with the primary intention of working with his father in the scrap metal store called J. Mayer & Son.

In 1907, Louis B. Mayer saved up some money to open up the Gem Theatre. He also renovated it to host about 600 people. This was his first entry into the theatre business. Unfortunately, his premises had a lousy reputation, and therefore he began by showing a religious film called From the Manger to the Cross. Shortly after, he partnered with Nathan H. Gordon to come up with the Gordon-Mayer group.

After a few years of working together, Mayer migrated and went to live in Los Angeles. Here, he continued with his theatre businesses after opening up a production company called Louis B. Mayer Pictures Corporation. In 1918, the first production from his show business was Virtuous Wives.

His most significant breakthrough came in 1924. This was after he partnered with Marcus Loew. Loew had a chain of studios including Metro Pictures, Mayer Pictures, and Goldwyn Pictures Corporation. Loew had previously purchased Goldwyn and Metro, but he lacked a manager to oversee its operations. Therefore, Mayer was his first choice due to his experience in the show business. He continued managing the operations for over two decades. Later on, Loew added Mayer’s name to his company and thus this was the birth of Metro-Goldwyn-Mayer.

Louis B. Mayer was married several times during his lifetime. His first marriage was to Margaret Shenberg in 1904. The two, however, ended their marriage in 1947. The following year, Mayer exchanged rings with Lorena Layson. The two lived together until Mayer passed away. He had two children from his marriage with his first wife, Margaret.