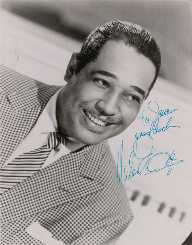 Edward Kennedy “Duke” Ellington was born on April 29, 1899, in Washington, D.C. Both of his parents were pianists, and his father also made blueprints for the United States Navy. When Duke was seven years old, he began taking piano lessons. His mother made a great effort to raise his son to be elegant and well-mannered. His peers noticed his dressing style and natural grace and began referring to him as Duke. Besides piano lessons, Ellington was also interested in baseball. He attended the Armstrong Technical High School in Washington D.C.

Ellington’s first job was selling peanuts in baseball games. in 1914, he began working as a soda jerk at Poodle Dog Café. During this time, he wrote his first composition “Soda Fountain Rag,” creating the piece by ear, since he did not know how to read or write music. When Ellington was 14 years old, he began sneaking into Frank Holidays Poolroom. He was listening to the piano music and began to love the instrument. Before that, he was skipping on many of his piano lessons but now started to take them seriously.

In 1916, Duke Ellington started playing gigs in the Washington D.C. area cafes and clubs. He turned down the art scholarship to the Pratt Institute in Brooklyn to pursue his music career. In 1917, he was working as a freelance sign-painter and also assembled groups to play for dances. He also had a messenger job with the U.S. Navy and State departments, which allowed him to make a lot of contacts. He later assembled his band and played for various official occasions.

In the 1920s, Duke Ellington began to perform in Broadway nightclubs. He was the leader of a band of five other musicians, which eventually grew into a 10-piece ensemble. Ellington often found musicians with a unique style. His bandmates included Bubber Miley with his signature “wa-wa” sound, and Joe Nanton, who was known for his trombone “growl.”

With his bands, Ellington made hundreds of recordings. His work has appeared in films and radio, and in the 1930s, he toured Europe twice. Ellington became widely famous in the 1940s, when he composed several pieces, including “Concerto for Cootie,” “Cotton Tail” and “Ko-Ko.” His hits were often sung by Ivie Anderson, which was Ellington’s band’s favorite female vocalist. During his career, Ellington won 12 Grammy Awards, three of them after his death.

In 1965, Ellington made his debut in Christian music with his Sacred Concerts jazz liturgy. The record received mixed reviews, but Ellington was very proud of his work, performing it many times. This record was later followed by two more concerts of the same type. Despite his advancing age, Ellington continued to make new and innovative records.

In 1967 Duke Ellington recorded an album with Frank Sinatra. Ellington’s last full concert was in a ballroom at Northern Illinois University in 1974. He also performed in shows in 1973, making his last appearance at the Sturges-Young Auditorium in Michigan.

In 1918, Duke Ellington married his high school sweetheart Edna Thompson. The couple had only one child, son Mercer Kennedy Ellington. In the late twenties, Edna followed Ellington to New York, but the couple soon separated. She said that she felt homesick and returned to Washington. After the separation, Ellington began seeing Mildred Dixon, who traveled with him and inspired his songs at the peak of his career.

In 1938, Ellington moved in with Beatrice Ellis, who was working at the Cotton Club. The relationship was stormy and filled with drama. They continued the relationship even after Ellington was in a relationship with Fernanda de Castro Monte in 1960s. For the rest of his life, Ellington supported both women. Ellington’s son Mercer played trumpet and piano and had his band. He also worked as his father’s business manager.
Ellington had lung cancer and died on May 24, 1974, after contracting pneumonia. Over 12,000 people attended his funeral.