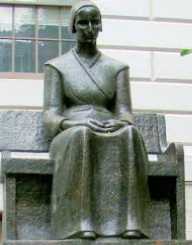 Mary Dyer was born c. 1611 in England, as Marie Barret. Also, historical records show Dyer had a brother, and she inherited his estate when he died.

Various people describe her as an educated, Godly woman.

On 27th October 1633, Dyer married William Dyer. He was a milliner, as well as a fishmonger.

Mary Dyer and her husband belonged to the Puritans. The Puritans worked towards separating the Anglican church away from the Catholic church. In the 1620s, King Charles I decreed that the English people would have one religion as practiced by the Catholics.

The Puritans began to migrate to the U.S.

In 1635, Dyer and her husband, William, sailed for New England in America. They settled in Boston, Massachusetts, and they joined the Boston church.

When Dyer arrived in Boston, the Reverend John Wilson ran the church. A clergyman by the name of John Cotton joined Wilson in the early 1630s. Dyer's friend, Anne Hutchinson, supported Cotton, and Dyer took the same side.

In November 1637, Hutchinson went on trial for slandering the ministers. The persecution continued, and the authorities called William Dyer before the court. William left Massachusetts to look for a new home.

In 1638, the church excommunicated Hutchinson. As she left the church after the trial, Dyer went with her, and the two women walked hand in hand.

Someone asked who she was, and another replied she was the person who had the monstrous birth. The Governor overheard the conversation, and he began to investigate.

As Governor Winthrop investigated, he demanded to dig up the baby's body. The authorities investigated Dyer's life after seeing the baby, to check if there was any judgment from God.

Twenty-three men signed a document to form a government. They installed William Coddington as the leader.

In 1639, the group split in two. One group established Newport, and the other group renamed their town Portsmouth. In 1640 the two cities joined together, and Coddington became Governor. William became Secretary, a position he held until 1647.

In 1647, the two towns joined with Providence and Warwick. One government ruled the four cities, and William became General Recorder in 1648.

Mary Dyer traveled to England with her husband, and she stayed there for more than five years.

She developed a keen interest in the Quaker religion, established in 1647. Dyer met George Fox, the founder of the Quakers, in 1652.

The Puritans, meanwhile, began persecuting the Quakers as they started to arrive in Boston in 1656. As a result, the Puritans began to torture them, afraid of the impact it was having on their religion.

She was arrested again in early 1658 and made to leave the colony. In 1659 she returned to Boston. She returned to support other Quakers. She found herself arrested yet again. This time their punishment was death by hanging.

On 27th October 1659, Mary Dyer and her two companions walked to the gallows. As the men hanged, Dyer received a last-minute reprieve. She returned home to Rhode Island and continued to commune with other Quakers.

In May 1660, Mary Dyer went back to Boston. Determined to force the hand of the authorities, she was once again apprehended. The Governor told her there would be no reprieve for her this time.

In September 1661, the King of England declared Quaker hangings were to stop. Persecution finished all together in the 1670s.

Dyer had eight children, one of whom was stillborn.

In 1997, Mary Dyer received induction into the Rhode Island Heritage Hall of Fame. In 2000, the National Women's Hall of Fame inducted her.