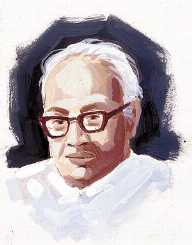 Meghnad Saha was born in the year 1893 in a place that is today known as Bangladesh. His father was Janagannath Saha. The family was in great poverty. They were many children, and Saha was the fifth. The family owned a shop which got them enough for their basic needs. Saha loved to read and to count. He fell in love with mathematics at a very young age. He was later given sponsorship by a local doctor to complete his studies which his parents were unable to pay.

Meghnad Saha was born fifth in a very poor family. His father’s wife, Bhubaneswari was the primary caregiver when Saha’s father was at their small shop. His father was eager to teach him the family business. He wanted him to stay home after primary education to learn more about buying and selling. Meghnad Saha was more interested in reading and outings. He had already found his first love which was mathematics.

Meghnad Saha’s family was very poor, and there were many mouths to feed. It was difficult to prioritize education over other basic needs. Meghnad Saha was fascinated by mathematics and excited about learning in school. He successfully completed primary school. His parents had no interest in furthering his education and preferred that he help at the shop making some extra money. Meghnad Saha got his school fees paid by a doctor from his village.

He was then able to move to college after his middle school excellence. He was upgraded to higher education in Calcutta. Here he met many influential people. These people taught him a great deal and he was forever thankful. The students and fellows who crossed his path described him as a self-driven person who wanted to learn more every day. They commended his academic prowess.

His rise to stardom was a journey which began when he met amazing people who would later propel him to his success. Chandra was one of his biggest influences on success. Meghnad Saha became a Fellow in 1927 which put him in a position to shine in mathematics and science. His interest in these two subjects then led to his curiosity about ionization. He then studied about thermal ionization and came up with an equation that measured the ionization of elements that are present in the stars. It is then that he was recognized for this invention and his name is currently used as a verb by mathematicians.

Meghnad Saha was a faculty in the University College of Science in Calcutta. There he was with a friend called Bose with whom they explored physics, especially thermodynamics. In Calcutta, Saha continued with his research on thermodynamics. He was a real astrophysicist, and he kept testing and trying new formulas. He engaged his students in continuing to learn more about ionization. Meghnad Saha wrote a note for the Astrophysical publication which published the issue of radiation. He went ahead to receive the Griffith Prize in the year 1920 for his paper on ionization. Meghnad Saha went to Allahabad in the year 1923. He was in the Congress of the field of science in the year 1925. He remained in the university for 15 years.  The University of Calcutta was happy to welcome him to their family in the year 1938. He pioneered the construction of a cyclotron in the university.

1920 was the biggest year for Meghnad Saha as he invented the ionization equation. This invention was named top ten in Indian science. It even got Saha a nomination to the Nobel prize.

Before the invention, Meghnad Saha was awarded a Doctorate. He also became a fellow in the field of science. He got affiliated with the Harvard and the Griffith award. He got many moments to shine during his time as a lecturer in Allahabad. He learned a lot of aspects of astrophysics with the support of his friend Bose.

Meghnad Saha created A cyclotron that was one of a kind in the Asian continent. He also planned the Damodar valley. This is where he showed architectural skills.

In 1918 Meghnad Saha married the love of his life Radharani. Together they had six children evenly distributed across genders.

Meghnad Saha was a very casual individual. His habits were quit predictable, and he preferred to do well and avoid facilitating harm. He was very strict with his students which made him appear aloof. He wanted things done right. He always pointed out mistakes with the purpose of correcting his students. He felt that his students were a reflection of who he was and they could carry on his legacy. Meghnad Saha made friends in his time and maintained great relations. He also learned from the people he came to meet. He died after a tragic heart attack in the year 1956.