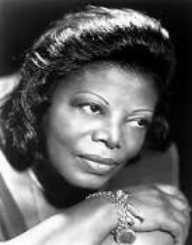 Mary Lou Williams was widely referred to as ‘The little piano girl of East Liberty.’ She was a jazz pianist who wrote over hundreds of records. She often changed her styles throughout her career. Her style varied from blues swing, blues and bebop music styles.

Mary Lou Williams was born in Atlanta Georgia on 8th May 1910. She was the second born child of eleven children. She spent most of her childhood in Pennsylvania. .At the age of three, she began showing her talent at the age of three teaching she started teaching herself how to play the piano.

She began performing to the public at the age of seven earning herself the nickname ‘The Little Piano Girl.' In her teen, she cited John Williams as her role model.

Mary Lou Williams began playing the piano professionally at the age of 12 at the Orpheum Circuit. A year later she joined Duke Ellington's band the Washingtonians.  Williams recalled one moment when Louis Armstrong overheard her play and was impressed that he proceeded to kiss her.

After her engagement to John Overton, she joined her husband's band taking the role of a pianist and an arranger. The group traversed various cities and recorded jams such as "Night Life" and Drag 'Em."

Their records were received well by the public raising their popularity. She, however, left the band in 1942 after divorcing her husband.

She later went to the New York to join Duke Ellington's orchestra band. She often performed at Greenwich Village nightclub. Also, she got a radio got a weekly radio show.

It was in New York when Williams showcased her ability to adapt to various kinds of music. She moved to Europe in 1946.

Mary Lou Williams left Europe in 1946 after walking out of a performance in Paris. After her return to New York, she stopped her performance since she felt her religious beliefs were not compatible with what jazz was all about.

She later found peace in the Catholic Church. She, however, resumed her career in 1957 in Newport Jazz Festival making an appearance with Gillespie.

Mary Lou Williams started her label Mary Records, becoming the first woman ever to start a music label. She, however, focused on sacred records given her new found Christianity.

One of her major compositions was Mary Lou's Mass. Her jam went on to become the first jazz piece to be at St. Patrick's Cathedral.

She performed at president Carters White House Jazz party. At the last stages of her life, she taught music at the University of Massachusetts

Mary Lou Williams married her fellow artist John Overton Williams, a saxophonist in 1926. The two met in Cleveland during a show. The two later moved to Memphis.

Williams later joined her husband after their formal engagement.

After over 350 compositions, Mary Lou Williams succumbed to bladder cancer which took her life 28th May 1981.