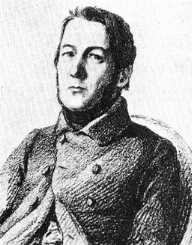 Mikhail Glinka was born on June 1, 1804, in Novospasskoye, Russia. For most of his childhood, he was raised by his grandmother, until her death. After that, he lived with his uncle.

Later on, Mikhail Glinka moved to St. Petersburg. Here, he studied at a private school. He studied several languages while here, as well as math, science, literature, and music. He stopped his lessons here around 1824. He then took a short break from his education to work.

In 1830, Mikhail Glinka continued his education and began to study again, this time at a conservatory in Milan. Here, he studied primarily under Francesco Basili. He stayed here for a short time before moving back to Russia. On the way home, he stayed with Franz Liszt (who no doubt musically influenced him) and studied under Siegfried Dehn. It wasn’t until 1834 that he actually made it back to Russia.

In 1824, Mikhail Glinka earned one of his first professional job s as an assistant secretary in the Foreign Office at the Department of Public Highways. While here, he also continued to practice music during his free time.

It was in the 1830’s that Mikhail Glinka started to professionally compose music. Some of his first compositions were A Capriccio and a Symphony on Two Russian Themes. He wrote both of these while traveling and studying in Europe.

Once back in Russia, Mikhail Glinka had more time to focus on composing music. In 1836, he also composed and produced an opera titled A Life for the Tsar. This opera was a resounding success, and boosted Glinka’s popularity all over the music and art world, but especially in eastern European countries.

In 1837, Mikhail Glinka was made the conductor of the Imperial Chapel Choir. While working in this position, he spent much of his time traveling to recruit new men for the choir.

After the failure of this opera, Mikhail Glinka lived a reclusive and quiet life. Mikhail Glinka still composed some music. Some of his most famous songs from his entire career are listed below.

Mikhail Glinka was first married to Maria Petrovna Ivanova in 1835. However, the two later separated, as they had little in common. They were divorced in 1838. This couple had no children together.

Mikhail Glinka died on February 15, 1857, in Berlin, Germany. The cause of his death was a general illness. He was only 52 years old when he passed away.

The Patriotic Song, composed by Glinka, was used as the Russian National Anthem from 1990 to 2000.

There is a statue of Glinka located in St. Petersburg.