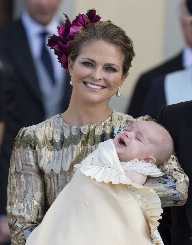 Princess Madeleine of Sweden was born on June 10, 1082, in Drottningholm Palace, Stockholm, Sweden. Her parents are Queen Silvia of Sweden and Carl XVI Gustaf of Sweden. Her siblings are  Prince Carl Philip (Duke of Varmland) and Victoria (the Crown Princess of Sweden).

As a child, Princess Madeleine attended the Vesterled Parish Pre-School. After she finished her education here, she went on to study at several other schools, including the Carlssons School and the Enskilda Gymnasiet. She later traveled to England to study English (the language) and computers.

For her post-secondary education, Princess Madeleine went on to attend Stockholm University. Here, she earned a bachelor’s degree in art history.

Princess Madeleine is currently (as of 2017) seventh in line for the throne. While there is still some distance between her ruling, she still is involved in ceremonies. She helps the royal family celebrate holiday s like Sweden’s National Day.

She supports the Swedish royal family in events around the world as well. She was at the opening of the New Sweden Gallery at the American Swedish Historical Museum in 2011.

One of the main charities that Princess Madeleine was involved with is the Min Stora Dag (My Big Day). This charity helps children who are suffering from cancer. It has much in common with the Made-A-Wish-Foundation.

Princess Madeleine and her family have set up a scholarship (named after her) to be given to horse riders. They were first given out in 2001. Some of the awards she gives out for this part are the Pony Rider of the Year award and the Gold Rider award. She was inspired to give out these awards because of her love of horseback riding. She has also won several competitions in horseback riding.

In 2006, Princess Madeleine joined UNICEF. She worked here both as a professional job (as an intern) and by generously donating to the program. Her main area of focus was that of child welfare.

In 2012, she was involved with the Thank You By Childhood campaign. She helped to found this group, as well as donating to it. This group works to protect children from sexual abuse.

Many of Madeleine’s awards and accomplishments are due to her royal status and her philanthropic works. Some of her most impressive awards are listed below.

Princess Madeleine married Christopher O’Neill in 2012. This couple has a daughter named Leonore and a son named Nicolas. Her children are also royalty with the titles of princess and prince. The couple expects to have another child in early 2018.