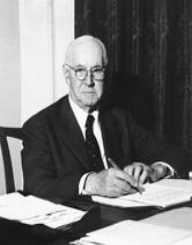 Sir Henry Hallett Dale was a Nobel Prize-winning British physiologist and pharmacologist who deeply studied nerve impulses. His work revolved around studying their chemical transmissions, and in 1936, he was awarded the Nobel Prize for this research together with Otto Loewi. For his revolutionary contributions, he was also honored with Knighthood by the queen of the British Empire.

Henry Hallett Dale was born on June 9, 1875, in London. His father Charles James Dale was a businessman while his mother Frances was a housewife. His star sign was Gemini. Dale grew up with six siblings.

As a kid, Hallett Dale was a bright child with exceptional insight into science. As he grew up, he chose medicine as his area of work.

Hallett Dale enrolled in the Tollington Park College before moving on to the Leys School, London. He then furthered his education at the Trinity College, Cambridge. He impressed his teachers at the Trinity College and specialized in Zoology & Physiology with distinction. He was awarded the Coutts-Trotter studentship.

This allowed him to research & study under famous physiologists like John Langley & Sir Hopkins.

Henry Hallett Dale continued his studies at the St. Bartholomew’s hospital in London on a scholarship. He then went to the University College, London as part of a research team in 1903. It was here he met Otto Loewi who became his friend and collaborator. Together they also shared the Nobel Prize years later.

While at UCL, Hallett’s research team came under fire by animal activists for performing vivisection on a dog.

Hallett Dale began his career as a pharmacologist in 1904. He joined the Wellcome Physiological Research Laboratories. Good work saw him rise to the rank of the Director at one of these laboratories within two years.He worked there till 1909 when he received his M.D. from the Trinity College, Cambridge.

Throughout his career, Henry Hallett Dale served in several important positions in organizations related to medical research. He was the Director of the Department of Biochemistry at the National Institute for Medical Research, London in 1914. In the same year, he isolated acetylcholine from animal tissue.

Henry Hallett Dale became the President of the Royal Society of Medicine in 1948 and held this post for three years until the end of 1950. Hallett Dale advocated the standardization of drugs & medicines and the use of nuclear energy in harmless medical research for scientific progress.

He was also the author of two books – Adventures in Physiology (written in 1953) and An Autumn Gleaning (1954).

Henry Hallett Dale received many awards & honors in his long career. He was made a fellow of the Royal Society of Edinburgh, and that of the Trinity College.

In 1936, he won the Nobel Prize in Physiology or Medicine along with Otto Loewi - his close friend. Order of the British Empire awarded him the Knight Grand Cross.

Hallett Dale fell in love with his cousin Elen Harriet. They got married in the year 1904. They produced three children – one son and two daughters.