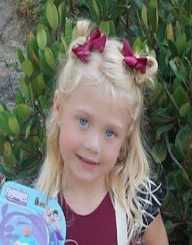 Everleigh Rose Smith Soutas' life has been a bed of roses since the day she was born. She started modeling alongside her mother since she was eight months old. Unlike other toddlers at that age, she had already known how to pose for the camera and model. At that age, she also had a sense of fashion. Her mother and her BFF’s mother Michelle Folley have been friends for a very long time, and they transmitted that to their children. The girls are good friends, and they appear in videos and photographs together.

Everleigh Rose Smith Soutas is a trendy and fashionable toddler who does not shy away from the camera. Her mother states that she is a stylish and chic child. Her mother is her photographer and manager as well when it comes to posting her videos and photos. Rose is in love with posing for the camera; it is sort of instinct that she was born with. She loves to dress up most of the time and look pretty. She wears any clothing so long as it is fashionable and makes her look beautiful.

Everleigh Rose Smith Soutas has attracted a lot of funs with her photos and videos. She is chubby and cute that almost everyone recognizes her. She has appeared in Vogue Austria. She was also featured in the campaign for the Kardashian Kids. She shares her Instagram and Musical.ly accounts with her BFF Ava Foley, and they go by the name @ForEverAndForAva. They have a lot of followers on both Instagram and Musical.ly.

Everleigh Rose Smith Soutas is a spectacular child because she can pose for the camera and model at her tender age. She has a screen presence that attracts almost everyone who looks at her. She is chubby, cute, beautiful and very confident. She is a fashionista as she loves to dress up in fashionable dresses and other garments. She is a model toddler one thing that surprises many people. There is much to say about her because not so many children her age can do what she does. She is a blessed child with a lot of potential.

Her mother’s contribution to her fame

Much of Everleigh Rose Smith Soutas' fame can be attributed to her mother, model Savannah Soutas. Her mother is her photographer. Savannah has been a great foundation in molding her daughter’s career. She is the one who posts her photos both on Instagram and Musical.ly. Rose is a celebrity and superstar who has already made, but she is just a kid like any other ordinary kid. She loves playing a lot, spending some time and playing with friends in the park, she goes to preschool, and she loves going to Disneyland. She mostly loves spending time with her parents and family. She is a diva in the making.

Everleigh Rose Smith Soutas is very easy with any cloth that is thrown her way. She also loves shoes and posing for the camera at any time. She has a busy routine that is full of modeling, dancing and gymnastics classes. She is a baby but beyond being called a baby.