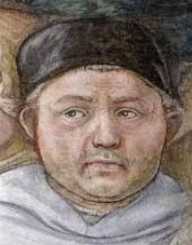 Filippo Lippi was born c. 1406 in Florence, in the Republic of Florence. His father, Tommaso, was a butcher. When he was very young, his parents died, and Lippi went to live with his aunt.

His aunt was unable to rear him due to her poor financial situation. Due to this, she placed him in the local convent.

At the age of eight, Lippi started his education at the convent. In 1420 he joined the Carmelite friars in the Priory of Our Lady of Mount Carmel in Florence. When he was 16, Lippi took his vows to join the church.

In 1425, Lippi became a priest. He remained with the same priory for the next seven years.

The monastery offered Lippi the opportunity to be educated in painting due to his keen interest in art.

He left the monastery in 1432, and he traveled to Naples and Ancona. He returned to Florence later that same year, and his artworks grew in popularity.

The Medici family commissioned work, although they had to imprison Lippi to make him work. Lippi escaped but faced financial trouble.

In 1441, a benefactor commissioned an altarpiece for the nuns of S. Ambrogio. Lippi painted the work, which is now in the Academy of Florence.

Lippi became chaplain at the Monastery of St. Mary Magdalene in Florence in 1452.

Over the next few years, Lippi settled in Prato, where he painted frescoes in the cathedral. He met Lucrezia Buti, and they had a child together, called, Filippino Lippi. The young Filippino went on to become a famous painter.

Lippi produced many paintings throughout his life. The most important works are believed to be the frescoes he painted at the cathedral in Prato.

Lippi spent his final years in Spoleto, where he continued to paint. The church commissioned him to depict various scenes in the cathedral.