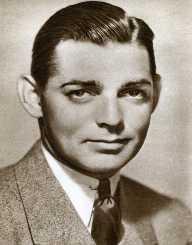 Clark Gable was an American actor who is best known for his role as Rhett Butler in Gone with the Wind.

Clark Gable was born William Clark Gable on 1 February 1901 and was mistakenly listed as female on his birth certificate. Gable was born in Cadiz, Ohio, where his father, William Gable, worked as an oil-well driller. Gable’s mother Adeline died before Gable was even a year old. Gable’s father remarried in 1913. Jennie Dunlap, William Gable’s second wife, had no children and raised Gable as her own. She taught him to play the piano. Gable enjoyed working on cars and literature as a teenager. He left school at age sixteen to work for a tire company.

Clark Gable became interested in acting at age 17 after seeing the play The Bird of Paradise. Gable had to work other jobs to supplement his income as he toured with stock companies. He took small parts in second class theatres in the Midwest. Gable met Josephine Dillon who worked as a theatre manager and became Gable’s acting coach, patron and wife. Dillon trained Gable to improve his speech and paid for him to have dental work done. In 1924 the pair moved to Hollywood. Gable’s earliest film work was as an extra in silent films. Failing to land any significant roles he returned to stage acting.

Clark Gable moved to New York and began to forge a reputation on Broadway. His performance in a stage production ‘The Last Mile’ earned Gable a contract with MGM. Gable’s first appearance in a talking motion picture came in the 1931 film The Painted Desert. The same year Gable played supporting roles in The Secret Six and Hell’s Divers. Gable co-starred with Joan Crawford in Dance, Fools, Dance. Gable finished with a string of starring roles including, Susan Lennox and Possessed.

The 1932 film Red Dust made Gable the most crucial actor at MGM and became their default leading man. In Red Dust, Gable performed alongside Jean Harlow for the first time, the two would star together in a further five films before Harlow’s death in 1937. Gable was loaned out to Columbia Pictures in 1934 for the film, It Happened One Night. Gable’s performance earned him an Academy Award for best actor and the film won best picture. The following year Gable received a second nomination for his role in Mutiny on the Bounty. At this time Gable was the biggest star in Hollywood.

Following his success Clark Gable began collaborating with Spencer Tracy, appearing in three films together. The collaboration propelled Tracy to stardom, and he started demanding top billing, this ended any future work between the two. 1939 brought Gable his most famous role as Rhett Butler in the American Civil War epic Gone with the Wind. Gable’s final line in the film is one of the most iconic of all time. The 1940s brought Gable limited success the film Adventure was a flop but his performance in the 1947 film Hucksters was critically acclaimed. The 1950s brought some commercial success but little in the way of acclaim.

Gable’s health began to decline and he developed a noted tremor. Gable was also overweight, and his age was starting to show. Despite this he continued to appear on hit films. His 1960 film, It Started in Naples, was nominated for an Academy Award. 1961 saw the release of Gable’s last film, The Misfits, where he co-starred with Marilyn Monroe and his performance received great acclaim.

Clark Gable was admitted to hospital on 6 November 1960 after suffering a heart attack. On 16 November 1960 Gable died from a blood clot. He was interned in a crypt at the Great Mausoleum in Glendale.

Clark Gable was renowned for his love life, having a string of affairs and marriages. Gable married his first wife Josephine Dillon in 1924, she was seventeen years his senior and the two divorced in 1930. In 1931 he married Maria Langham, and they divorced in 1939. Gable met his third wife Carole Lombard while filming No Man of Her Own. The two began a romance in 1936 and were married in 1939. The period is often seen as the happiest of Gable’s life. It was cut short when Lombard was killed in an airplane crash in 1942.

Gable suffered severe weight loss following Lombard’s death. Gable had a series of affairs with Joan Crawford, and the two lived together in 1946. Gable married again in 1949, but his marriage to Sylvia Ashley ended in divorce in 1952. During the filming of the film, Mogambo Gable had a brief affair with Grace Kelly. In 1955 Gable married Kay Williams and became stepfather to her son Bunker. Williams was pregnant with Gable’s son, John Gable when Gable died.

Clark Gable won the Academy Award for Best Actor in 1935 for his role in It Happened One Night. He was nominated for best actor a further two times, in 1936 for Mutiny on the Bounty and in 1940 for Gone with the Wind. Gable also received two Golden Globe nominations in the Best Actor in a Comedy or Musical category for Teacher’s Pet in 1959 and But Not for Me in 1960.

Following his third wife Caroline Lombard’s death, Clark Gable enlisted in the U.S Army Air Force. Gable became an aerial gunner with a bomber crew. Gable trained with the 351st Bomb Group in Texas and 1943 was based with the unit in England. Gable flew five combat missions as an observer-gunner. He earned an Air Medal and a Distinguished Flying Cross for his service.

In one mission Gable’s plane suffered flak damage and a member of the crew was killed. Upon hearing this MGM worked desperately to have him withdrawn from active service. Gable was promoted to Major in 1944 but received no further combat missions. Gable was discharged on June 12, 1944, as he was over age for combat. Ronald Reagan signed Gable's discharge papers.