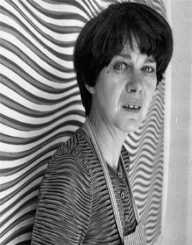 Bridget Riley is a painter with some of her best work from the 20th century.  What makes her well known is her creation of optical illusion art.

Bridget Riley was born on April 24, 1931, in West Norwood, London, England.  Her father was a printer and served in World War II.  The family moved to Lincolnshire in 1938.

Bridget Riley's did not have a formal primary education due to the displacement of war.  She did get to Cheltenham Ladies' College from 1946 to 1948.

Bridget Riley then went to Goldsmiths College from 1949 to 1952.  She then transferred to The Royal College of Art where she graduated in 1955 with a Bachelor of Arts degree.

After college, Bridget Riley presented some of her work in exhibits.  However, her father's poor health contributed to her mental breakdown.  Rather than work in her studio, she taught at different schools in the 1950s and 1960s including the Croydon School of Art.  She further developed her artistic point of view.

Bridget Riley did her spin of pointillism by treating optics in the paint.  Her first painting in his technique called “Kiss” led to her first solo show in London in 1962, then New York in 1965.  The black and white geometric patterns were optical illusions to the eye of the beholder.  The buzz about Op art began.

Bridget Riley's early works were monochromatic.  In 1967 she started using color in her Op art work.  The use of polychromy took her art to a higher level with positive feedback.  Her work was in high demand, especially in the 1970s.

By the 1980s, however, the excitement of her artwork was no longer in fashion.  She continued to work.  She created murals for art institutions such as the National Gallery and Musee d'Art Moderne de la Ville de Paris.

In 2014, Bridget Riley painted the third of her permanent murals for St. Mary's Hospital in London.  Riley was also the curator for some exhibits and collections over the years.

Bridget Riley also made contributions to the British artist community.  In 1968 along with fellow Op art friend Peter Sedgley, they created SPACE.  It stands for Space Provision Artistic Cultural and Educational.  The purpose of SPACE was to provide London artists with an industrial-sized studio space.