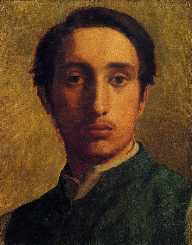 Edgar Degas was born on July 19th, 1834 in Paris, France. Degas was identified as a man having many talents. Among the many professions, he was a skilled painter and a sculptor. After studying in École des Beaux-Arts, he went on to become an iconic portraitist. His impressionistic abilities fused harmoniously to deliver something that his fans quickly fell in love with. With his impressive skills, his works have been classified as a motivating factor for modern artists such as Pablo Picasso. Degas died at the age of 83 while in Paris.

Edgar Degas was born in 1834 in Paris. He was born to a somewhat well-off family. He was the first born child of Célestine Musson and Augustin De Gas. His father worked as a banker. Degas’s parents loved music. His mother was a part-time opera singer while his father worked to ensure that musicians did their recitals in their home. For his secondary education, Degas went to Lycée Louis-le-Grand. This was a prestigious and a meticulous institution.

With his father being an art lover, he encouraged Degas from time to time during his childhood. When Edgar Degas was 18 years old, he was permitted to act as a copyist at the Louvre Museum located in Paris. In the 19th century, upcoming artists perfected their skills by being copyists. This meant that they would try and draw replica works from what they considered as best. While still drawing as a copyist, Degas managed to draw copies done by individuals such as Titian, Raphael, and Michelangelo.

Later on, in 1855, the young talented artist got his admission to École des Beaux-Arts. However, Edgar Degas only spent a year studying at the institution before leaving to Italy. He chose to spend three years doing what he loved, painting, travelling and exploring. In 1859, he was back to Paris with a mission of making a name for himself out of his painting talent.

While working on his new and refined style of painting, Degas chose to settle for a traditional style of painting. His primary focus was painting portraits as well as significant historical scenes with the likes of "Scene of War in the Middle Ages," "Semiramis Building Babylon" and "The Daughter of Jephthah." He went ahead and submitted his unique works to people who were in charge of exhibitions, the Salon group. In 1865, Degas managed to exhibit his works at the museum. After this first exhibition, he successfully displayed annually for the next five years.

Edgar Degas's popularity arising from the exhibitions he was making at the museum earned him a spot with avant-garde artists whose members were Manet, Claude Monet, Alfred Sisley and Pierre-Auguste Renoir. The group organized for frequent meetings where they could share ideas on how artists would succeed in the modern world.

Later 1873, Edgar Degas made his return to Paris. During this time, he co-operated with Sisley, Monet, and other artists in coming up with a group named Société Anonyme des Artistes- Meaning; Society of Independent Artists. Their main aim was to ensure that they could exhibit their works of art without facing limitations from Sadon. The newly formed group would, later on, be identified as the Impressionists.

A year later in 1874, the group showcased their first exhibition. After this, Edgar Degas went on to utilize this opportunity to showcase his modern paintings featuring modern women, e.g., ballet dancers, milliners, and laundresses.

Edgar Degas did not get married during his lifetime. He dated many women without ever marrying any. His affair with his longtime friend Mary Cassatt is the only relationship that got the attention of many.