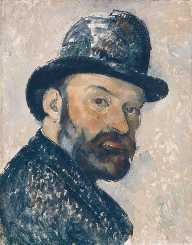 Paul Cézanne was a famous French artist and post-impressionist painter. Born on January 19, 1839, his works had great influence on 20th-century abstract art movement and artists. Cézanne’s works looked odd as they departed from the conventional values of painting in the 19th century.

He paid critical attention to personal expression and integrity of his paintings, and this eventually became a forerunner of the transition from 19th century impressionism to the more varied 20th century Cubism. Connoisseurs of arts and the public however relegated and rejected his works several times due to his style during most of his life.

Paul Cézanne was born on January 19, 1839, in Aix-en-Province. He was born to Louis Augustus Cézanne and Anne Elisabeth Honorine Aubert. He had two you siblings, Rose and Maria.

His father was a co-founder of a banking and that afforded Cézanne financial stability in his painting career. he received education at the Saint Joseph School in Aix and continued at the Collège Bourbon in Aix (currently Collège Mignet) in 1952. While there, he met and befriended Émile Zola and Baptistin Baille. They build a solid friendship through which they became known as "les trois inséparables" (the three inseparable). Cézanne started attending the Free Municipal School of Drawing in Aix from 1957, and this was where he studied drawing under Spanish monk, Joseph Gibert. His father’s wish was for him to become a lawyer, and to fulfill that wish he entered law school of the University of Aix from 1858 to 1861. He continued to receive drawing lessons during this period. With his strong passion for artwork, Cézanne defied his father’s will, left the University, and moved to Paris.

While in Paris Cézanne became acquainted with Impressionist Camille Pissarro, who he understudied and later did several collaborative works in landscape painting. His initial works concentrated on the figure in the landscape, which he imaginatively painted. He later matured his works by painting from direct observation and with time developed a light, airy painting style. Cézanne in his entire life struggled to develop a true reflection of the seen world by adopting an accurate method to represent them in his paintings. He, therefore, resorted to structurally ordering his imaginative views into simple forms and color planes. He worked in genres including landscape, still life, portrait, and studies of the bather.

Cézanne’s works from 1864 to 1869 were mostly exhibited at the Salon des Refusés, which was set up to exhibit works rejected by the jury of the Académie des Beaux-Arts. Nonetheless, he continually presented his works to the Salon until 1882. With the help of fellow artist Antoine Guillemet, he started exhibiting at the Salon including works like Portrait de M. L. A, Portrait of Louis-Auguste Cézanne, The Artist's Father, Reading "L'Événement", 1866,  He called these works une couillarde and were predominantly dark colors. Others include Women Dressing, 1867, The Rape, 1867, and The Murder, 1867–68. He also exhibited some works in other venues. In 1895, the Parisian dealer, Ambroise Vollard afforded him his debut solo exhibition.

In 1870, during the Franco-Prussian War, Cézanne moved from Paris to L'Estaque, near Marseilles, with his mistress and later wife Marie-Hortense Fiquet in order to escape enlistment to the army. During this period, his paintings were largely landscapes including paintings like Snow at Estaque (1870–71) and The Wine Market (1872). He returned to Paris in the summer of 1871 after the war and a year later moved to Auvers in Val-d'Oise near Paris. He worked with Camille Pissarro on different landscapes. It was during this time that he decided to abandon dark colors and embrace brighter ones. He started moving between Paris and Provence and exhibited in the Impressionist shows "Société Anonyme des artistes, peintres, sculpteurs, graveurs, etc.” of 1874 and 1877. The show was organized by the Impressionist movement consisting of artists whose works were rejected by the Salon. His works attracted the collector Victor Chocquet, from him he had commissioned to cushion his life. His impressionist works include "House of the Hanged Man" (1873-1874) and "Portrait of Victor Choque" (1875-1877).

In the 1880s Cézanne’s Zola published the novel L'Oeuvre, which portrayed the life of a failed painter (believed to be Cézanne). This affected him greatly and therefore broke his friendship with Zola. His father had also died and other personal challenges made him redraw from most of his friends to become a loner. His family established a permanent home in Provence. In the 1890s he was able to bounce back from the life of isolation. The public interest in his work also increased with the exhibition of his works by dealer Ambroise Vollard. He exhibited at the annual Salon des Indépendants in Paris in 1899, 1901, and 1902. In 1904, he had an entire room at his disposal at the Salon d'Automne. Works at the time include "Bay of Marseilles from L'Estaque" (1883-1885); "Mont Sainte-Victoire" (1885-1887); "The Cardplayers" (1890-1892); "Sugar Bowl, Pears and Blue Cup" (1866); and "The Large Bathers" (1895-1905).

Paul Cézanne married Marie-Hortense Fiquet in 1886 with whom he had a son Paul. Paul Cézanne died of pneumonia on October 22, 1906. He had been overtaken by a storm will working on the field and fell unconscious. He was interred at the Saint-Pierre Cemetery in Aix-en-Province.