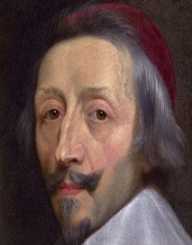 Cardinal Richelieu was born Armand Jean du Plessis on the 9 September 1585 in Paris, France. He was academically gifted and sent to college at the age of nine.

He was a pupil at the College de Navarre in Paris. In 1602 he started studying theology, and on the 17 April 1607 he was made Bishop of Lucon.

Cardinal Richelieu’s political career started when he represented the clergy of Poitou in the States General of 1614. In 1616 he was appointed Secretary of State. He went into self-imposed exiled to Avignon in 1618 and composed a catechism, Instruction du Chrétien.

Pope Gregory XV made Cardinal Richelieu a cardinal on the 19 April 1624. He rejoined the Council of Ministers, and on the 12 August, 1624 was appointed President.

Cardinal Richelieu advocated clearly defined roles for the clergy, nobility and common people. He believed in the divine right of the sovereign whose role it was to promote peace and order. He also thought that the state is above all other institutions and that religion is an instrument of the country, following the Machiavellian school of political thought that the end justifies the means when it comes to policies of the state.

When Cardinal Richelieu was Prime Minister, France’s King Louis XIII was on the throne. The combination of the Huguenots (a Protestant group), political corruption and the power of the nobility threatened the role of the King. These threats led to Richelieu ensuring the security of the crown by the use of political repression and force. Between 1627 and 1631 he had tackled the Huguenot problem, removed his enemies from government and punished nobles disloyal to the King. He also increased the King’s authority via intendants, royal agents who resided in the various provinces.

To protect the monarchy and the state, he applied the rule of law ruthlessly. Cardinal Richelieu has gone down in history as the person who helped make France one of the powerhouses of Europe.

Cardinal Richelieu died on the 4 December 1642 in Paris, France. He was fifty-seven years of age.