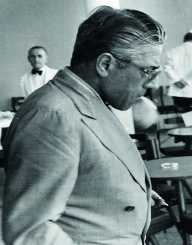 Aristotle  Onassis was born on 20th of January 1906. He was born in Karatas, Smyrna, in the Ottoman Empire, which is modern-day Turkey. He was born to Socrates and Penelope Onassis. Onassis had a sister named Artemis, and when his mother died, and his father remarried, he had two half-sisters.

Aristotle Onassis attended the Evangelical School of Smyrna, and he graduated at age 16.

Smyrna was caught up in the middle of war. After World War I, Smyrna was ruled by Greece, but during the Greco-Turkish War, was re-taken by Turkey. The Onassis family had to flee Smyrna, losing all the family properties and becoming refugees.

Aristotle Onassis moved to Argentina in 1923 and found himself a position at the British United River Plate Telephone Company as a telephone operator. He soon decided to go into his own business and opened an import-export company. He became very wealthy importing tobacco into Argentina.

In 1929, he became an Argentine citizen. After becoming a citizen, Onassis opened his first shipping trading company, called Astilleros Onassis. Onassis continued to amass his fortune through shipping. As well as keeping his Argentinian offices open in Buenos Aires, he moved to New York City in the U.S. He continued to expand his business, opening in Athens as well.

Aristotle Onassis expanded his empire to more than 70 freighters and tankers. Being a smart businessman, Onassis had his vessels registered in Panama, which meant he could operate them tax-free. This enabled him to offer his services at greatly reduced prices. He had long-term contracts with major oil companies such as Mobil and Texaco, which enabled him to amass a further fortune.

In 1953, Aristotle Onassis started buying up shares in Societe des Bains de Mer de Monaco (SBM). SBM is a company in Monaco that owns and manages the Monte Carlo Casino, the Opera de Monte Carlo, the Monaco Yacht Club and the Hotel de Paris. Onassis was able to take control of the company that same year and soon moved his offices to Monaco.

The ruler of Monaco, Prince Rainier III, welcomed Onassis to Monaco. Rainier was trying to increase investment in Monaco, and he saw the takeover as a welcome move in that direction. Over the years, Rainier and Onassis had differing opinions and their relationship cooled. In 1966, Rainier created new shares in SBM, which watered-down Onassis’ holdings. Onassis sold his shares and moved from Monaco.

At the same time Onassis was taking over SBM, he was also negotiating with the King of Saudi Arabia to move all their oil to the U.S. The U.S. government vetoed the agreement to avoid a monopoly, and just for good measure, decided to target Aristotle Onassis for fraud against the U.S. government. He was found guilty of violating citizenship provisions in the shipping laws and fined $7 million.

Yet another business venture during the early 1950s saw Onassis take part in whaling. His first whaling expedition netted him a profit of US$4.5 million. Due to negative press reporting, Onassis sold the business to a Japanese company for $8.5 million.

In 1956, Onassis began negotiations with the Greek government to allow him operational rights to the Greek air transport industry. Onassis took over in 1957. He had 16 planes, to begin with, and Onassis continued to run the operations until 1974. He terminated the contract due to several commercial setbacks.

Onassis owned many shares, and he had a controlling interest in more than 95 companies around the world. His companies were varied, from airlines to gold-processing plants, and from transport to chemical companies. There was, of course, real estate as well.

In 1946, Aristotle Onassis married Athina Mary “Tina” Livanos. She was the daughter of another shipping magnate, Stavros G. Livanos. The couple had two children, a son, Alexander, and a daughter, Christina. Onassis and Livanos divorced in 1960.

In 1957, Onassis met Maria Callas. The two carried on an affair for several years, and they were public after the divorce. Callas was an opera singer. Onassis married Jacqueline Kennedy in 1968. Kennedy was the widow of the assassinated U.S. President, John F. Kennedy. Onassis ended his relationship with Callas to marry Kennedy.

Aristotle Onassis was ill for the last few years of his life, and in 1975, he died from respiratory failure. 55% of his estate went to his daughter Christina, the other 45% went to the Alexander S. Onassis Public Benefit Foundation, which had been established in memory of his son. The foundation has a business sector which operates various businesses. All the profits go to the public benefit sector of the foundation which promotes Greek culture across the globe.

Jacqueline Kennedy Onassis was reported to have received $10 million and has grown that amount to several hundred million through her current partner, Maurice Tempelsman. Christina’s share of the estate passed to her daughter, Athina, which at the time made Athina one of the wealthiest women on the planet.