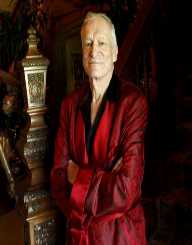 Hugh Hefner is known for being the founder of the Playboy Enterprises as well as being an American Adult Magzine publisher. With the introduction of Playboy magazine, he became known to have revolutionized the adult entertainment industry. He also extended his enterprises to include the internet and television. When he first published his first magazine featuring Marilyn Monroe, he had no idea that his publication could be a success instantly.

Playboy enjoyed instant success as it sold over 50, 000 copies. Thus, Hugh Hefner and the magazine became popular. Before his magazine, he had been a successful journalist for Esquire and served in World War II. In fact, he was born into a conservative family in Chicago and studied psychology, art, and creative writing at the College before he became a journalist. He later ventures into the adult magazine which was a bombshell after being refused a raise. He had a string of sexy models as his girlfriends, a lifestyle that is promoted by his magazine. He is a well-known political activist as well as a philanthropist.

Hugh Hefner was born in Illinois on April 9, 1926, to Grace and Glenn Hefner. He was the elder of the two sons his parents had. His parents were teachers and are strict Methodists. He had schooled at Sayre Elementary School before he went to Steinmetz High School in Chicago. His love and interest in journalism was kindled and founded a school newspaper while he was in high school. He championed the cause of the students as the president of the Students’ Council. He later went ahead to serve in the US Army for two years and wrote for a military Newspaper. At the end of the war in 1946, he was discharged. He enrolled himself at the University of Illinois, but before then, he studied at Chicago Art Institute. He graduated from Illinois with a BA in Psychology with a double minor in creative writing and art.

His career started when he worked as an assistant personnel manager for the Chicago Carton Company in 1949. He also served as an advertising copywriter for the Carson Pirie Scott department store before he got himself a job to work with Esquire as a copywriter. Hugh Hefner worked there till 1952 when he was denied a $5 raise in his pay. He left there and decided to start his publication. He launched his magazine and named it Playboy. The magazine featured the image of a famous sex symbol, Marilyn Monroe. Surprisingly, the magazine which was published in December 1953 sold over 50, 000 copies. It was an instant success for it. He began hiring other people to assist him in making the audience better to the audience following the unprecedented success. By the end of a decade, the magazine was now selling more than a million copies a month.

Hugh Hefner later held his first Playboy Jazz Festival at the Chicago Stadium after being overwhelmed by his great success. It was said to be the greatest weekend in the history of Jazz. By 1960s, he has become not only wealthy but endowed with a fleet of beautiful and sexy young models. He later extended his business to the club and had his own Playboy Mansion (Playboy Club). The magazine later became the largest-selling men’s magazine in the world with its erotic images and interesting articles. The success of the magazine kept on increasing day in – day out. By 1970s, the magazine could boast of excess seven million copies with more than 900, 000 members all over the world. However, his health deteriorates probably due to the pressures of running the huge and very popular magazine as well as the stress of wild partying. He had a stroke and decided to change his lifestyle leaving everything to his daughter to control.

Hugh Hefner is best and notably known for being the founder of Playboy Enterprises which manages Playboy Magazine empire as well as other business ventures. The company owns and operates the Iconic Playboy Mansion Property in Los Angeles. It should also be noted that Playboy played a very important role in the sexual revolution in America.

Hugh Hefner had some awards and achievements to his name. He got inducted into the Hall of Fame of the American Society of Magazine Editors in 1998. He later got the highest honor of the Magazine Publishers of America in 2002 before he got presented the Founder’s Hero of the Heart Award in 2010.

Hugh Hefner was married to Mildred Williams in 1949 and had two children – Christie and David. The two however divorced in 1959. He later married Kimberley Conrad in 1989 and had two sons from the marriage. The two finally divorced in 2010 after being separated in 1998. Hefner later married a 26-year-old Harris in 2012. Apart from all these marriages, he is known to have had several sexual relationships with other ladies.