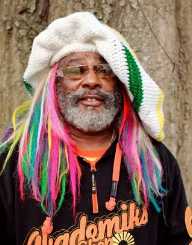 George  Clinton is an American singer, songwriter, bandleader, and record producer. Born on July 22, 1941, he is considered as one of the prime innovators of funk music alongside Sly Stone and James Brown. He is known for his Parliament-Funkadelic collective, which came with an influential but varied form of funk music during the 1970s. These works were centered on outlandish fashion, science-fiction, and surreal humor. In 1981, he pursued a solo career through which he influenced hip pop and G-funk in the 1990s. In 1997, he was inducted to the Rock and Roll Hall of Famealong with 15 members of Parliament-Funkadelic

George Clinton was born on July 22, 1941, in Kannapolis, North Carolina in the United States. He grew upPlainfield, New Jessy. With his interest in music since childhood, Clinton formed a doo-wop group called The Parliaments during his teenage. His inspiration came from the doo-wop group Frankie Lymon& the Teenagers. During this period he was a co-owner of Silk Palace, a barbering shop at 216 Plainfield Avenue. It housed most members of Parliament-Funkadelic and became a "hangout for all the local singers and musicians" in Plainfield.

Clinton served as a staff songwriter for Motown in the 1960s. He also arranged and produced scores for independent soul music labels in Detroit. Clinton and the Parliament suffered some commercial failures during the initial stages of their career. However, their single (I Wanna) Testify released in 1967 was a major hit. Despite the challenges of the start, the group had a breakthrough with the names Parliament and Funkadelic. Performing with the two names concurrently, the band used elements of musicians like Frank Zappa, Jimi Hendrix, James Brown and Sly and the Family Stone. The band also experimented with different kinds of technology, lyricism, and sound. With these, the band became a force to reckon in various style of music during the 1970s.

They released over three platinum albums and over 40 hit R&B singles with three making it to the number one on the chart. Clinton and some members of the Parliament-Funkadelic moved to Toronto within 1971 and late 1973. This was when they recorded the album America Eats Its Young featuring Bootsy Collins. They also improved on their live show performances during this period

Clinton launched a solo career in 1982. As a solo artist, he recorded several minor solo albums with contributions from some musicians of the P-Funk. That same year he had a deal with Capitol Records under his name as a solo artist and as the P-Funk All-Stars. After the signing, he released the solo album Computer Game, which contained the hit singles Loopzilla and Atomic Dog all making it to the R&B charts. Clinton followed it with the studio albums You Shouldn’t-Nuf Bit Fish, 1983, Some of My Best Jokes Are Friends, 1984, R&B Skeletons in the Closet, 1985 and the live album Mothership Connection (Life from the Summit, Houston, Texas). He released the album Cinderella Theory in 1989 under the record labelPaisley Park, Prince’s and Hey Man, Smell My Fingers in 1993. He was signed to Sony 550 and released T.A.P.O.A.F.O.M(The Awesome Power of a Fully Operational Mothership) in 1996.

Clinton produced albums for the likes of Red Hot Chili Peppers and Bootsy Collins among others and worked on most albums he performed on. In 1985, he produced Red Hot Chili Peppers’ album Freaky Styley. He did not just produce but also wrote vocals and lyrics of the title track. Although the album was not successful commercially at that time, it has sold more than 500,000 copies since the band became famous.

Clinton contributed performed and contributed to many tracks on Primal Scream’s studio album Give Out But Don’t Give Up in 1994. He performed the song Mind Games on the John Lennon tribute Working Class Hero in 1995.Many hip-hop artists of the 1990sdrew inspirations from his music. Most of his beats were used as samples by rapper, Dr. Dre in creating his G-Funk music.  Clinton worked with several hip-hop artists including rap legend Tupac Shakur on the song Can’t C Me from the All Eyez on Me album. He worked with Ice Cube on the song Bop Gun (One Nation) among several others.

Clinton also did some acting works appearing in various films including Graffiti Bridge, 1990, House Party, 1990, and PCU in 1994. He also appeared in Good Burger, 1997 and The Breaks in 1999. Clinton appeared as himself in the Cartoon Network show Space Ghost Coast to Coast in 1997 and voiced the character The Funtipus, DJ of the Funk radio station of Bounce FM, in the video game, Grand Theft Auto: San Andreas in 2004. He wrote the theme song You’re Thinking Right for The Tracey Ulman Show.

Clinton served as a judge on the 5thannual Independent Music Awards. He released the solo album George Clinton and His Gangster of Love in 2008 on the Shanachie Records. In 2013, he guest starred in the Old Future television show Loiter Squad on Adult Swim. He appeared on rapper Kendrick Lamar song "Wesley's Theory" from the To Pimp a Butterfly album. Clinton and the Parliament Funkadelic are slated are to headline the Treefort Music Fest in Boise, Idaho in 2018. He says he would retire from touring in May 2019.

The Broadcast Music Incorporated gave him the Urban Icon Award on September 10, 2009, and was inducted into the North Carolina Music Hall of Fame that same year. He received an Honorary Doctorate of Music from Berkes College of Music in May 2012.

In 1990, George Clinton married Stephanie Lynn Clinton. They have a son George Clinton Jr. who was found dead on February 1, 2010, in his Florida home. A police report indicated that he died of natural causes and several days before he was found. Clinton filed for divorce in February 2013 after 22 years of marriage.