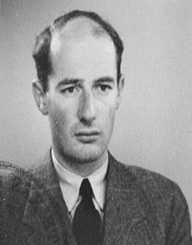 Raoul Wallenberg was born on the 4 August 1912 in Stockholm, Sweden into a distinguished family of professors, bankers, bishops, and diplomats. His father was Raoul Oscar Wallenberg (1988-1912), a lieutenant in the Swedish navy; and his mother was Maria Wising (1981-1979). After his father died in 1912, his mother remarried in 1918 and had a further two children, Guy von Dardel and Nina Lagergren.

After graduating from high school and completing his Swedish military service, Wallenberg enrolled at the University of Michigan and graduated with a degree in architecture in 1935.

Once he had finished his studies, Wallenberg worked for a bank in Haifa in the Middle East. At the time many Germany-Jewish refugees were arriving in Haifa, and Wallenberg heard their accounts of conditions for Jews in Germany under Hitler, who had come to power in 1933.

In 1944, the American War Refugee Board asked the Swedish government for assistance in dealing with refugees from Hungry. Sweden found that Jews in Hungry were desperate to obtain visas to leave and they decided to send a special envoy to deal with issuing passports. Wallenberg was appointed secretary of the Swedish embassy in Budapest. He was granted full diplomatic privileges as well as official access to Hungary’s leaders. In July 1944, Wallenberg arrived in Budapest with a mandate to assist Jews who had any connection with Sweden.

During this time, he oversaw the issuing of protective passport and protective letters. The protective letter was a document which allowed the holder to travel to Sweden.  He also purchased houses under the Swedish flag which were used as protective houses. Wallenberg worked hard to protect the Jews in Budapest until on the 17 January 1945; he was taken away by Russian soldiers. He was never seen again. The Soviets eventually admitted, in 1956, that Wallenberg had died in prison in 1947.

The free world treated the 1956 announcement of his death with scepticism. After Wallenberg’s diplomatic passport and various other personal items were discovered in the KGB headquarters in Moscow and returned to his family, political pressure led to a Russian-Swedish working group. The working group found that Wallenberg had more than likely died of poisoning in prison in 1947.

Yad Vashem recognized Raoul Wallenberg as Righteous Among The Nations on the 26 November 1963. He was also awarded honorary Israeli citizenship in 1987. His story has also been recorded in books and on film.