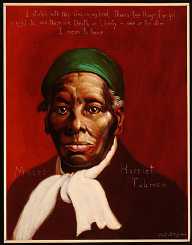 With nerves of steel, Harriet Tubman made a daring escape from slavery. She then turned her efforts to help free black slaves from bondage.  The US government plans to put her portrait on the US 20 dollar banknote to honor her struggles,

Harriet Tubman was born into slavery; no official birth records were kept. It is said Harriet was born in 1825, in Maryland. She was born Araminta Ross to black slave parents. Her father was Ben Ross and mother Harriet Green. Tubman later adopted her mother’s maiden name, Harriet.

Childhood life for her was tough. Violence, both physical and emotional, was a regular occurrence. As an adolescent, she was struck on the head. She sustained lifelong injuries. Tubman suffered seizures and headaches for the rest of her life. Her father, mother, and Tubman worked for different slave owners. She saw three of her sisters sold into slavery. Though her father was later freed by his owner, the rest of the family remained in slavery. They had different masters.

Her mother introduced her to Christianity. Harriet Tubman never believed in some of the Bible’s teachings. She agreed with the Old Testaments story of resistance and deliverance. The New Testaments teachings of obeying your slave masters never convinced her heart. Stories of how her mother successfully resisted the sale of her son convinced her.

In 1849, rumors were rife that they would be sold. Tubman decided to escape. To hide her identity, she adopted her mother’s first name and her husband's last name. She had a new identity, Harriet Tubman. With the help of sympathizers and other freed slaves, Tubman managed to reach Pennsylvania. In the freed state, she got work in several places. With the money she had saved, she planned on returning to help her family escape.

The Underground Railroad was a network of cottages and safe houses. They were owned by slavery abolitionists and former slaves. Using this network route, Harriet Tubman helped many fugitive slaves escape to the northern states. The first mission back to Maryland was in December 1850. She helped her sister’s family escape to freedom. Tubman also helped her parents and siblings to escape. Many other people were moved to independence.

The 1850 Fugitive Slave Law changed the lives of escaped slaves. Fugitive slaves in the freed states were to be captured and returned to their owners. Many slaves were returned to their slave masters. This made Tubman change the escape route destination to Canada. Slavery was prohibited in Canada. She continued aiding slaves to Canada. This earned her the nickname Moses. Tubman made 13 expeditions to free about 70 slaves. During her journeys south, she worked closely with abolitionists Frederick Douglass and John Brown. Brown was later executed.

When the American civil war broke out in1861, Harriet Tubman sided with the Union forces. She worked as a cook and nurse for the army. She was also a scout spy, making forays into enemy territory. Tubman led the Combahee River Raid. This army expedition led to the freedom of over 700 slaves in South Carolina. Most of the freed slaves fought alongside the Union army. After the civil war, Tubman joined with other abolitionists to fight for civil rights. She believed former slaves and women had rights to vote.

Harriet Tubman got married to John Tubman in 1844. John Tubman was a free black man from Maryland. The couple broke when Harriet decided to escape. John Tubman stayed back in Maryland. She got married to Nelson Davies in 1869. Davies was a veteran Of the Civil War. They had an adopted daughter called Gertie. She was adopted in 1874. Tubman spent most of her late life in Auburn, New York. She suffered ill health and died of pneumonia in March 1913. A burial with semi-military honors was given in her send-off.

Harriet Tubman is celebrated as the most influential woman before the civil war. Many civil rights activists acknowledge the impact she has on their lives. Several learning institutions bear her name. The home for the aged where she spent her final years was named after her. The movie “A Woman Called Moses” was produced in her remembrance.