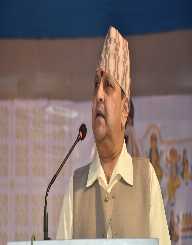 Gyanendra Bir Bikram Shah Dev was born on July 7, 1947, in the Narayanhiti Royal Palace in Kathmandu. He was born to Crown Prince Mahendra Bir Bikram Shah Dev and Crown Princess Indra Rajya Laxmi Devi. He was brought up alongside five siblings. In 1950, he became the King of Nepal after his family fled to India because there was a threat to their lives. He was made King by Prime Minister Mohan Shamsher. He attended St. Joseph’s College in India. Later he joined the Tribhuvan University, Kathmandu where he graduated from in 1969.

In 1975, Gyanendra was the Chairman of the Advisory Committee that was in charge of arranging the coronation of his elder brother, King Birendra Bir Bikram Shah Dev. In 1982, he became the chairman in the King Mahendra Trust for Nature Conservation. In 1999, there was civil war between the government of King Birendra and the Maoist guerrillas. In 2001, the whole family of Nepal was massacred apart from him. On June 4, 2001, he was sworn in as the King of Nepal.

In 2002, Gyanendra went ahead to dismiss the parliament that was headed by Prime Minister Sher Bahadur Deuba. In the same year, he dismissed the Prime Minister and took the ruling of the country. From 2002 to 2005, he dismissed other Prime Minister for not being to hold elections during civil war. He tried to re-establish the Constitutional Monarchy that was abolished by his elder brother to no avail.

In 2006, he handed over power to a Prime Minister chosen by the seven party alliance. The Prime Minister was Girija Prasad Koirala; he became Prime Minister only in agreement that King Gyanendra would have a say in government. In the same year, all powers of the King including veto powers were abolished by the Parliament. This was due to the fact that the seven parties and the Indian government went against their word.

The Prime Minister got all the powers that were entitled to the King. In 2007, an interim parliament was established. The same year also saw the establishment of an interim government. In December the same year, a bill for the amendment of the 1990 Constitution was passed. The amendment saw the transition of Nepal from a Monarchy into a Federal Democratic Republic. All his properties were confiscated and nationalized in the same year.